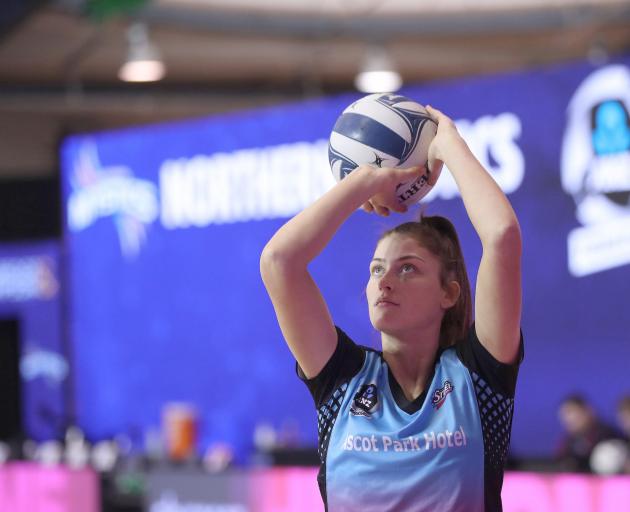 Returning Southern Steel shooter Georgia Heffernan warms up during her last stint with the team in 2020. PHOTO: MICHAEL BRADLEY PHOTOGRAPHY
There was plenty of emotion when the call finally came.

Georgia Heffernan will reprise her spot in the Southern Steel squad, after a false start in her rookie season.

The 22-year-old shooter had put in plenty of work to recover from the ACL tear she suffered during the 2020 ANZ Premiership.

She missed this past season and in that time alternative options came to the fore.

English import George Fisher had shone and signed on for a second year.

Tiana Metuarau had a breakout season, but opted to go back to the Central Pulse.

Saviour Tui was signed and will make the move south from the Northern Mystics.

So when Steel coach Reinga Bloxham got in touch last week, Heffernan did not know what to expect.

"Curly [Bloxham] called me, it would’ve been last week some time," she said.

"I got a text from her about when it would suit to call.

"She just called and said she was really excited to give me a contract and that there was a spot for me.

"I was really excited. I was pretty emotional about it all. I didn’t know how it was going to work for me, the whole rehab thing; I was really happy about it."

Heffernan said there had been some tough days during the rehabilitation process.

She had worked with the Steel right through it and had been determined to get herself back.

In August last year she had her knee operated on, and nine months later she finally made it back on to the court.

She had been playing with Phys Ed A in Dunedin club netball and had enjoyed that as a way to get her confidence back up.

The Southern Blast also provided her an opportunity to get a handful of National Netball League games towards the end of the season, too.

There was also a taste of the highest level — when she was called into the Steel squad as cover for a concussed George Fisher.

"It just made me so much more motivated to keep working hard and work for that contract.

"I was definitely sitting there like, ‘oh my gosh it feels like so long’. I’m really grateful they gave me that opportunity."

Heffernan’s twin sister, Kate, is one of four other players confirmed to round out the Steel’s 2022 squad.

She joins Shannon Saunders, Renee Savai’inaea and Ali Wilshier as the team brings back the same midcourt quartet as this year.