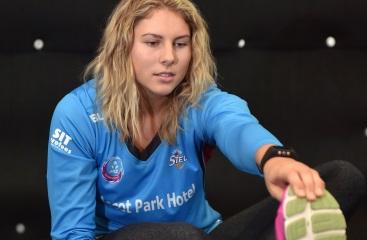 Steel defender Storm Purvis loosens up during a gym session in Dunedin this week. Photo by Gregor Richardson.

Storm Purvis is expecting big things from the Southern Steel this season.

The 22-year-old Steel defender is entering her sixth season with the franchise, and is excited about the "fresh ideas'' new coach Noeline Taurua has brought to the table.

She has played most of her netball for the Steel under former coach Janine Southby, who also coached her at the national under-21 level.

Taurua replaced Southby, now the Silver Ferns coach, in November and has made a good impression on Purvis.

One area Purvis can see change from recent years is on attack, an area the Steel has been criticised for as being too one-dimensional in the past.

Critics have called the team a one-trick pony for too often settling for long balls into towering Jamaican shooter Jhaniele Fowler-Reid.

"Noeline has got an incredible attacking mind,'' Purvis said.

"She was obviously a really good attacking player in her day.

"She has really helped out the likes of Te Paea [Selby-Rickit], Gina [Crampton], Brooke [Leaver] - the young girls at the attacking end that haven't had much experience in the ANZ Championship.

"So maybe a bit more confidence in their play, you might see that this year. They are not afraid to let some balls go. They are trying new styles of running, we call it the bow, things like that we're trying out that you might see in the play.''

The Steel will get a chance to show what it has got when it opens the ANZ Championship against the Northern Mystics in Auckland tonight.

It is sure to be a stiff challenge against a team which includes current Silver Ferns squad members Maria Tutaia, Cathrine Tuivaiti (nee Latu), Kayla Cullen and Anna Harrison.

Including a 57-52 loss in Auckland, the Steel lost both matches against the Mystics last year.

Purvis is expected to start in the goal keep bib, and will have her hands full trying to keep the dangerous Tutaia and Tuivaiti in check.

"They are definitely a very experienced duo,'' she said.

"They've played together for a very long-time. I think we're just going to look to disjoin them, to kind of mess with that link a little bit.

"But they've also got a bit of inexperience in the midcourt, so hopefully we can look to exploit that.''

The Mystics could also call upon giant shooter Megan Craig (22), who at 2.04m surpasses Fowler-Reid (1.98m) at the tallest player in the competition.

She notched up 40 caps for the Steel between 2008-2011, before spending the past four years playing for the Pulse.

But she is now back in the South, and along with Jane Watson and rookie Abby Erwood, make up the defensive end for the Steel this year.

"At first it was a bit weird not having Phoenix around, but I think the four of us defenders have a really good thing going on.''

Purvis singled out Erwood as one to watch in the future, after she did not hold back when she got the opportunity to mark Tutaia in a pre-season match in Auckland a fortnight ago.

"She was just in there going for everything all up in her grill,'' Purvis said.

"It was awesome to see a young player with all that confidence and willingness to give it all. She is one to watch.''

Purvis said competition for spots ahead of tonight's match was stiff, and the team did not yet know who would be starting.

It is a big season for the 1.86m defender, who was named in the Silver Ferns for the first time in December, and is on track to play her 50th match for the Steel when it hosts the Mystics in Dunedin on May 29.

Despite being only 22 years old, she is the sixth most capped player in franchise history.

"I've always referred to myself as a young player and have said I'm inexperienced, but I can't really say that anymore,'' she said.

"It is probably going to be quite good for me just to back myself and have some confidence with my place. Just be someone that the new ones coming in to look up to and hopefully set some standards.

"Playing my 50th game for the Steel would be nice.''

Provided she stays fit, she is sure to reach the milestone.

However, a left-ankle injury from last season is still lingering.

Purvis missed two games last year due to the injury, which she picked up against the Pulse in May.

"It's one of those things that I think I'm going to have to nurture for the rest of my life. Fingers crossed it lasts the season.''