Netball: No pregnant pause for coach 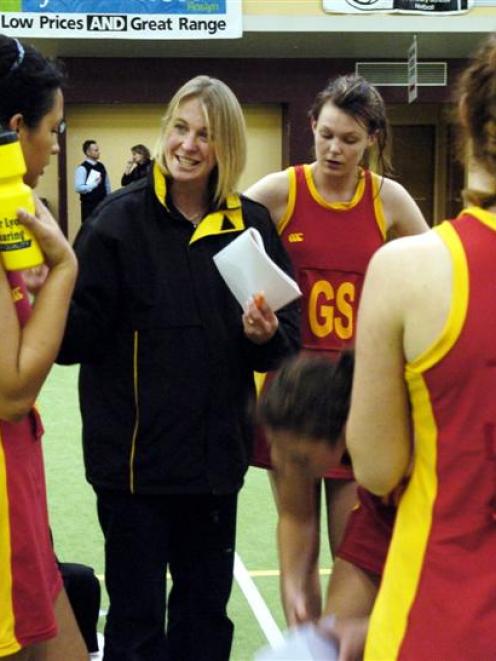 The Dunstan High School coach, probably tired of fending off questions about smuggling a netball in under her jacket, made good use of her large tummy.

Pregnant with her third child, O'Connor (nee Grubb) used its surface for jotting down notes on the sideline while her team played Columba College during day three of the South Island secondary schools tournament.

But perhaps some of her players were more concerned with the health of their coach.

O'Connor was due yesterday and had been having contractions since Tuesday night.

"I thought it was all go [on Tuesday night].

''But I've told them that I will try and hold off until the last game [today]," she said, chuckling.

"But the girls will be well looked-after.

''We've got a back-up coach organised."

O'Connor said coaching helped take her mind off the imminent birth and was a good way to give back to the sport.

The 31-year-old developed her netball skills at the school when she attended in the early 1990s.

Dunstan began well but two losses yesterday ended its prospects of gaining promotion to the A grade.

"We had an awesome start to the tournament but had some tough games [yesterday] and lost our way a little bit.

"We dropped down from A grade last year and it was our hope to get back up there."

O'Connor married former Black Cap Shayne O'Connor in Alexandra in 2001 and the couple have two children - Thomas (4) and Hannah (2).

O'Connor played seven matches for the Otago Rebels between 2001-02.

She played for Otago while attending university in Dunedin in the mid to late '90s and returned to play for the province in 2003, where she played alongside her sister, Silver Fern Maree Bowden.

O'Connor said she and her sister were fiercely competitive with each other growing up but she was immensely proud Bowden had gone on to become a regular fixture in the Silver Ferns.

In the A grade, Oamaru's St Kevins will play St Peters (Gore) in one semifinal, with Villa Maria (Christchurch) playing Motueka High School in the other.