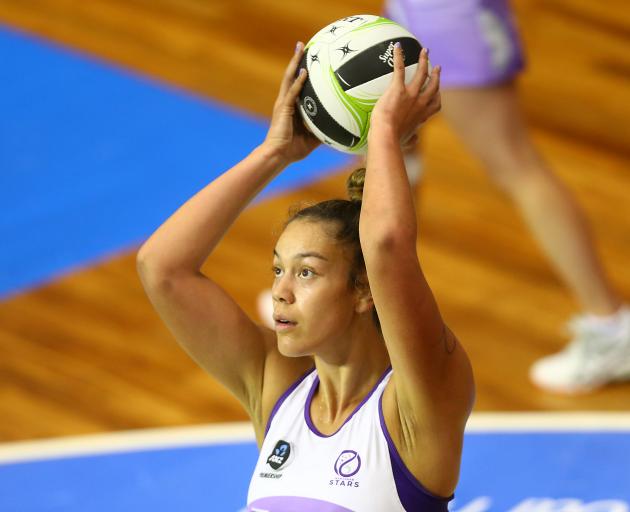 Maia Wilson shot 36 of her 39 attempts in a player-of-the-match performance for the Stars. Photo: Getty Images
Sport does not always reward endeavour.

The gallant can still lose. The resourceful can come up short.

Some years you just have to settle for doing the best you can.

And realistically, pride is about all the Steel can rescue from this season.

With the tournament more or less at the halfway point, the grand final seems an almighty stretch for the Steel.

The franchise recorded its sixth loss in seven matches in Auckland on Saturday night. It fielded a weakened line-up against the Northern Stars and battled hard for three quarters.

But the energy drained out of the effort in the last quarter and the Stars pulled away to win 48-39.

They deserved their win. They played some tight netball. Shooter Maia Wilson drilled 36 of her 39 attempts in a player-of-the-match effort. Oceane Maihi made an impact when she came on at goal keep, and midcourter Mila Reuelu-Buchanan had some fine moments.

The Steel was missing back-up shooter Georgia Heffernan, who has been ruled out for the season with a knee injury.

Goal shoot Jen O’Connell did not take the court either. She twisted her knee in an awkward fall on Friday night during the 40-37 loss to the Pulse.

She will get a scan as soon as possible but she is on crutches and it is reasonable to expect the worst — her season looks over.

The Steel had to fly in Beko Netball League player Grace Namana, while Kiana Pelasio made her first-run on appearance for the side.

They gave a good account of themselves, while import shooter Kalifa McCollin shouldered more of the load and had a strong game. She popped in 27 of her 29 attempts.

Coach Reinga Bloxham was pleased with the effort given the setbacks the side has had to deal with in the past few weeks.

"Overall, I’m extremely proud of the way the girls have handled themselves this weekend," Bloxham said.

"[Friday’s] game was a tight battle and I felt like we had the upper hand for most of that game. But to see Jen go down was pretty horrific, so for the girls to be able to rally together and themselves up for [Saturday’s] game was no easy task.

"But they have shown they can overcome this sort of thing and just get out there and try and do their best and I felt they did that."

The Steel fell behind by six goals early on but clawed its way back and went into the first break down by just a single goal. The side slipped further behind in the second period but won the third quarter 11-9.

The match was in the balance, but the Stars posted three unanswered goals at the start of the final period and it had a chilling effect on the Steel’s energy levels. The Stars went on to win the quarter 15-8 and the game by nine.

In yesterday’s games, the Northern Stars defeated the Waikato-Bay of Plenty Magic 45- 43 and the Mainland Tactix downed the Northern Mystics 41-40.