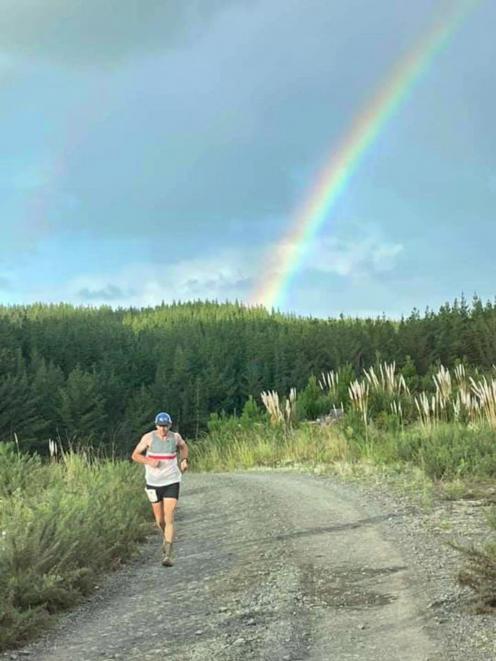 Dunedin runner Chris Bisley on his way to winning the Riverhead Backyard Ultra race in Auckland. PHOTO: GARETH MORRIS
Chris Bisley has claimed victory in one of New Zealand’s most gruelling races.

The Dunedin runner ran for more than 31 hours at the weekend to win the last-man-standing Riverhead Backyard Ultra race in Auckland.

Bisley found himself in a tussle with Sam Harvey for 37 laps, before Harvey dropped off for Bisley to run his solo victory lap and set a race record.

Before that, 83 other runners had dropped off, the next-closest completing 30 laps.

The backyard format began in Tennessee and consists of runners running one 6.71km lap every hour.

Each lap begins on the hour, every hour, and runners have to be ready on the start line to remain in the race.

It started as a way to make it more realistic for runners to be able to complete 100 miles in 24 hours — as that is what 24 laps works out as.

Keeping a steady pace of around 50min laps had been key to that.

"That last-person-standing format, it’s about being patient and really managing your effort and managing yourself," he said.

"Getting through that 100-mile [160km] mark in pretty good shape so you can push on from there.

"It kind of worked that way. I felt strong right through."

Bisley had been coming off a good training block, having won Dunedin’s Three Peaks Plus One 55km race three weeks ago.

He said the course at the Riverhead event had suited him, having some climbs which suited his strength-based style.

Bisley planned to run a race in Christchurch next month if his body had recovered in time.

He also had an eye on racing in the new 200-mile distance at the Great Naseby Water Race on August 26.