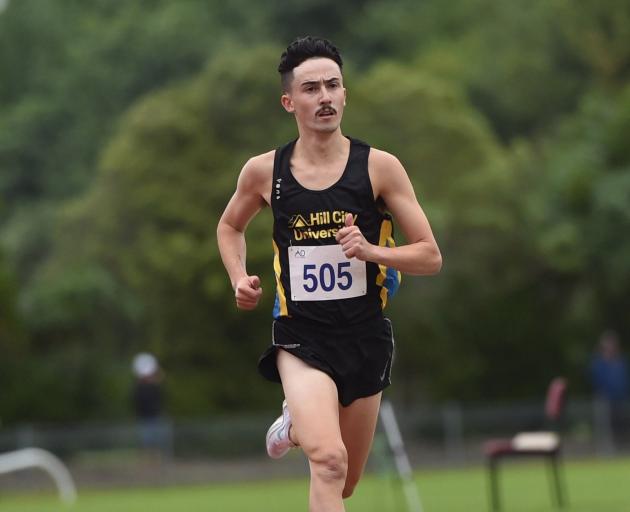 Oli Chignell competes in the Ness Cup during the Yvette Williams Memorial meeting at the Caledonian Ground last week. PHOTO: GREGOR RICHARDSON
Oli Chignell’s homecoming race may not have yielded a time of any significance.

It was a performance that has left him content, though, as he heads into the busy part of the domestic track and field season.

The 23-year-old Hill City-University runner is eyeing his first championship race of the summer today.

He will be among the notable names in the field for a 3000m national championship which will be held at Napier’s Potts Classic.

The national mile championships, at Cooks Gardens in Whanganui, will follow a week later.

Chignell raced for just the second time this summer in the Ness Cup at the Yvette Williams Memorial meeting last week.

It was his first competition at his home Caledonian Ground for four years.

His personal best of 3min 59sec left him to start the handicap mile 2min 17sec after the scratch runner.

It left him chasing the 18-runner field, although he did well to pull in the majority and finish fifth.

His time of 4min 13sec was not as eye-catching as the sub-4min performance he delivered last summer in Whanganui, however, he was happy with where it left him given the circumstances of a cold and windy night, and running solo, largely in lane two, as he spent most of the race passing runners.

"I think, as a starting point, not too bad," he said of the performance.

"I had no idea what position I was going to be in coming into this. I think now finishing it, even though I’m in a base period of training, I know I can go under that sub-4min mark again.

"I went through the halfway mark on pace. But unfortunately that Caledonian back straight wind really fired through.

"I’m happy with it. It’s a good starting point and I’m ready to move forwards."

Chignell’s main focus was for later in the year, when he plans to head offshore for the American and European summer.

It will be his second running trip abroad, having also spent time in Europe in 2019.

His goal was to be peaking then, with an aim of qualifying for the Commonwealth Games and world championships, both to be held later this year.

Despite that, he was still hoping to compete well over the coming weeks.

While the fields would not be as loaded as last summer, when everyone returned home amidst the pandemic and was seeking Olympic qualification, there was still quality around.

"We’ve definitely got a few people here and ready to compete," Chignell said.

"But I think everyone knows getting overseas is going to be the big aim. Hopefully we can all push each other to some solid times here and then even better overseas."

Otago long jumper Shay Veitch will make his return to the track at the meeting.

The defending national champion missed the Yvette Williams meeting with a hamstring injury.

However, he was "looking for something big" tomorrow.

In the throws, Dyani Shepherd-Oates will compete in the hammer, while Holly Robinson will turn out in the shot put.