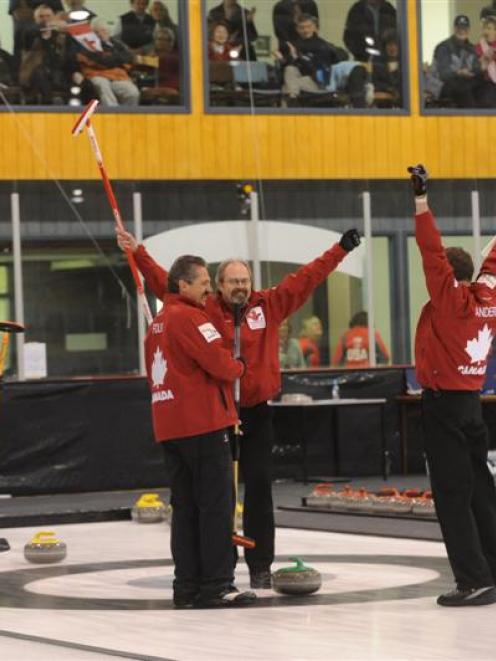 But this was the first time a world championship gold medal was at stake.

It had been a long journey for the curlers from the Nutana Curling Club in Saskatchewan to get to Dunedin for the world senior championship.

They had to play 25 qualifying games and win three qualifying events just to get to the Canadian championships.

Only the winning team qualified for the world championships.

Hritzuk (59), a commercial real estate agent, knew that there was a lot at stake for himself and his team who were all representing Canada for the first time.

He could not afford to let nerves and the pressure of the moment upset his concentration.

There was only one United States stone in the house and it had to be removed if Canada was to claim the gold medal.

If the delivery was too heavy, the rock would knock out the Canadian stone but not stay in the house to give Canada the win.

The weight and direction needed to be spot on.

Hritzuk relied on his vast experience as a curler.

"The ice was very good and very predictable," he said.

"I knew what the rock would do before I threw it."

The rock was on target.

It hit the United States stone and it slid out of the circular house and his own stone was the shot.

The gold medal belonged to Canada.

"Years ago, I told my curling friends that my dream in life would be complete if I could throw an in-house hit to win the world title," Hritzuk said after the game. The Canadians modified their normally aggressive game and adopted a cautious approach to the final.

The United States got on top early and scored singles on the first and third ends to lead 2-0.

"I wasn't concerned because we are good at playing an aggressive style and could come back," Hritzuk said.

"But we had to be cautiously aggressive.

"We didn't want to be kamikaze and get burnt."

It was a cat-and-mouse affair with only singles being scored.

When the United States scored their third single on the seventh end, the scores were level at 3-all.

On the last end, the United States set up two guards in front of the house and planned to have their skip come around the back for the winning shot.

Hritzuk recognised the danger and asked his second, Verne Anderson, to clear away the rocks from in front of the house.

"I didn't want anything in front of the house," he said.

"I wanted a wide open shot with my last rock."

Anderson came up trumps with a brilliant double peel to clear the two rocks away from the front of the house.

It was the shot of the final and paved the way for Canada's gold medal.

The skip was a relieved man.

"Our journey to get here was tougher than the curling we faced this week," he said.

"To qualify through the Canadian system is incredibly difficult.

"Because of the tough competition, you usually only get one chance to represent Canada as a senior.

In the semifinals, Canada beat Switzerland 8-7 and the United States beat Scotland 6-5.