Fencing: Trophy on the line at regional tourney 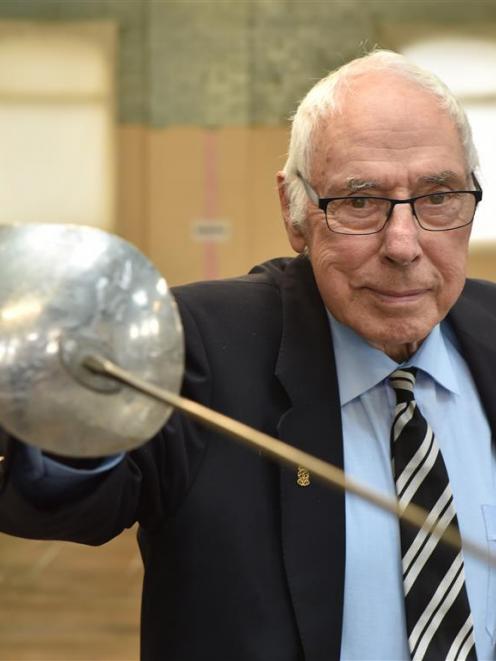 Dunedin fencing stalwart Ted Nye at the Claymore Swords Club in the city yesterday. Photo by Gregor Richardson.
The 29-year-old Ted Nye Trophy will again be on the line when competitors converge on Dunedin this weekend.

The trophy was named after the 89-year-old Dunedin fencing identity and will be contested during the Otago-Southland regional tournament at the Claymore Swords Club.

It was first competed for in 1987 but was put on the shelf shortly after and resurrected about 10 years ago.

The tournament is expected to attract about 30 people.

Nye moved to Dunedin from the United Kingdom in 1960 and went on to become a fencing stalwart.

He was introduced to the sport while doing his medical training at the University of London and St Bartholomew's Hospital, and took it up because it was something to do away from studying.

He fenced for his medical school, university and county team while in the UK, before moving to New Zealand.

Nye then represented Otago-Southland teams for several years and competed for New Zealand against Australia in 1969.

The trophy was established to raise funds for the Otago Community Hospice, with which he was involved for many years.

Nye, who turns 90 next month, said fencing was both a physical and mental test.

"There's a lot of activity in it. It's physically demanding, there's the idea of personal combat and the history goes back a long way.''

Claymore Swords Club president Dave Barson said the sport was more popular than ever, and the club had more than 100 members.

When he joined about 10 years ago, the club had four members, he said.

It used to be based at the University of Otago Clubs and Societies Centre before moving to its new home in Bond St in 2010.

Having a permanent base was a big reason for the club's growth and it was one of only three centres in New Zealand with a permanent facility, he said.

The tournament usually raised about $250 to $500 for the hospice.