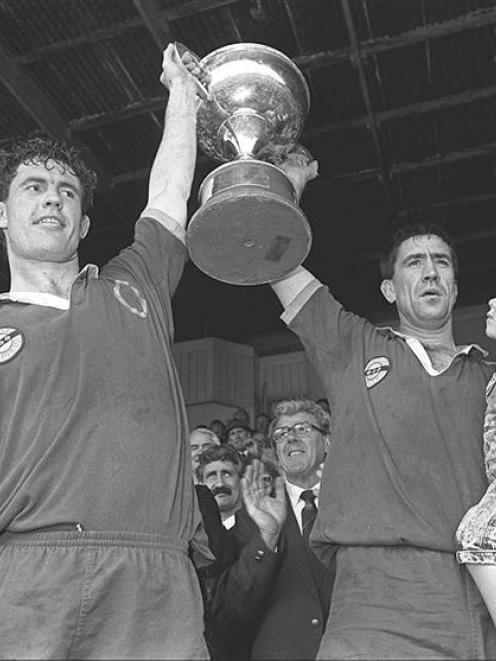 Otago forwards Mike Brewer (left) and Richard Knight celebrate with the trophy after sealing victory in the national championship at Carisbrook in 1991. Photo from <i>ODT</i> files.
This had been a long time coming.

Otago had some great teams over the years - the shield sides before and just after World War 2, the sides of the late 1960s, which almost won the Ranfurly Shield, and the side in 1975, which lost just two games.

The pain for the 1975 team was the national provincial championship was not established until the following year.

By then Otago had lost players to South Africa, others had retired and Bay of Plenty ended up winning the first title.

Otago went into a slide in the late 1970s and by the time Laurie Mains came on board in 1983, it was near the bottom of the top division, and was struggling to be competitive.

Mains changed all that, getting players up to speed and bringing in others to the province - with the likes of fullback Greg Cooper and lock Gordon Macpherson coming south.

Along with the never-ending supply line coming out of the University of Otago, the blue and golds started creeping up the table.

In 1988, Otago had a close Ranfurly Shield match against Auckland and was good enough to finish third in the championship.

By 1991, the team was boosted by the likes of young loose forwards Jamie Joseph and Aaron Pene, while halfback Stu Forster was a revelation behind a dominant forward pack.

Otago started its season slowly and lost to both New South Wales and Southland before the NPC had started. Then, in its second game of the NPC, it was beaten by Counties in Pukekohe.

But the team rebounded with wins over Taranaki and Canterbury, and then prepared for a game at Carisbrook against defending champion Auckland.

The Ranfurly Shield holder arrived in the south minus 14 of its top players who had been picked to play for the All Blacks in the Rugby World Cup, and ruled ineligible to play.

Auckland came into the game unbeaten but in front of a packed Carisbrook crowd was always going to struggle.

Otago led 14-6 at the break after tries from Cooper and Joseph and there was just one penalty in the second half as it maintained its lead. Auckland was not helped by losing key lock Robin Brooke before halftime when he was ordered from the field.

Otago won 17-6, and now there were two games left to win the title.

Meanwhile, Otago captain Mike Brewer had been picked for the All Black World Cup side. But a foot injury and a botched fitness test led to Brewer not getting on the plane and instead suiting up for Otago against Wellington.

His inclusion helped Otago win, and on October 5, Otago ran out against North Harbour, knowing a win would give it the title in the last season before a finals series was introduced.

With a huge crowd, there was only going to be one result - Otago won 26-10 with tries from Marc Ellis, Paul Cooke and John Haggart.

Cooper added the rest, giving him an incredible 279 points for the season.