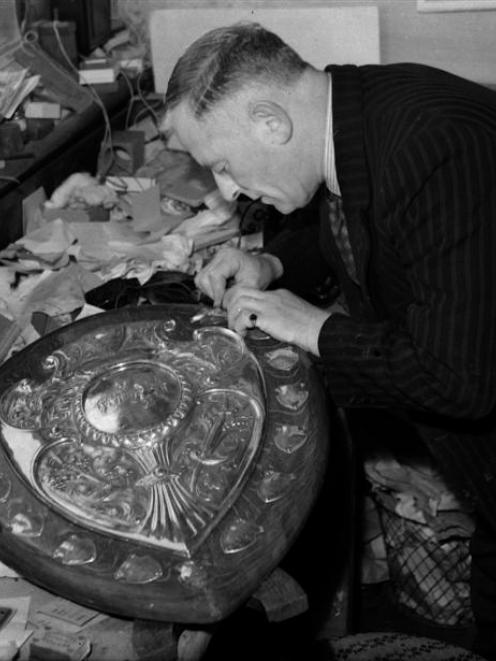 Otago beat Canterbury 15-6 in its 11th challenge for the Log o' Wood. It was the start of a great era when the shield stayed south of the Waitaki for 15 years.

It was the last game of the season and Otago had a strong fan base at Lancaster Park, with two trainloads of supporters surging on to the ground after the game to congratulate the players.

There was a large crowd at the Dunedin Railway Station to greet the team when it arrived home. The shield touched Dunedin soil for the first time at the station.

Two of the tries were scored by future All Blacks, winger James Watt and hooker Charlie Quaid.

Otago had a strong pack and the ball was used efficiently by the inside pairing of Charlie Saxton and Trevathan.

Saxton was renowned for his fast, accurate and long dive pass that gave Trevathan time to use his kicking skills to put pressure on the Canterbury defence.

Trevathan was the first player in New Zealand rugby history to be recognised for his drop-kick skills.

In six years of premier club rugby for Southern, he kicked 58 drop goals. They were all worth four points.

Otago had talent to burn but the only current All Blacks playing that game in 1935 were centre Herb Smith and wing Joe Procter. Utility forward Did Vorrath and front-rower Jack Hore were on the boat to Britain with the All Blacks.

There is a magic that surrounds the shield holders and this helped Watt, Trevathan, Saxton, Quaid, Colin Gillies and Allan Parkhill become future All Blacks.

Bill Laney, a mayor of Oamaru and teacher at Waitaki Boys' High School, was a key player in the Otago pack that day.

In 1937, Southland beat Otago 12-7 at Carisbrook and took the shield to Invercargill. But Otago got it back the following year when Southland was beaten 7-6 at Rugby Park in Invercargill.

Otago defended the shield five times before Southland got it back in the return game when it beat Otago 10-5.

The shield remained in Invercargill during World War 2, with the highlight being Southland's 17-3 win against Manawatu in a game that was played on a snow-covered Rugby Park in 1939.

Southland beat Otago 3-0 in the first defence after the war in 1946 and defended the shield that year.

The era ended in 1950 when Canterbury beat Otago 8-0 in a grey midweek game at Carisbrook.