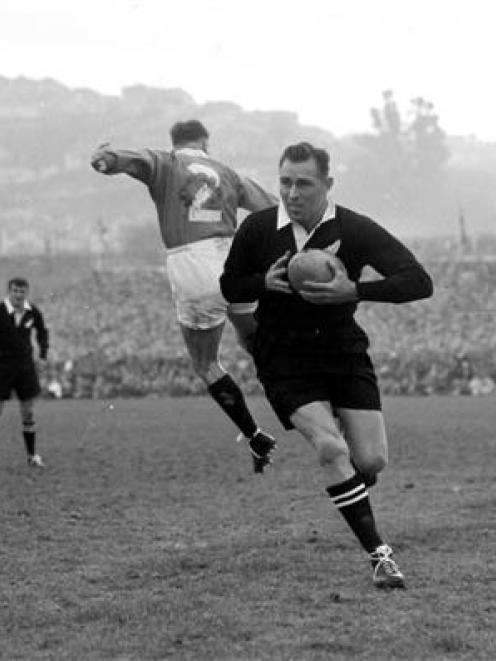 All Black fullback Don Clarke makes a break against the Lions at Carisbrook in 1959. Photo from ODT files.
The Otago Daily Times counts down the 150 greatest moments in Otago sport.

It was a classic, contrasting battle between the enterprising heroes of the South and the grim invaders from the North.

In 100-plus years of test rugby at Carisbrook, it stands clear as the greatest game of all.

When the All Blacks met the Lions in the first test of the 1959 series at Dunedin's hallowed - now soon to be mothballed - ground, the country came to a standstill.

More than 41,000 crammed in to Carisbrook, with some climbing billboards to get a better view.

By the end of the game, there was plenty to discuss.

One team had scintillating backs, and a mandate to run the ball from everywhere.

The other was full of big, unsmiling giants. And a kicker - a very good one - who banged over goals from everywhere.

The good guys scored four tries, and lost. The team that would cop all the criticism kicked six penalties, and won.

No wonder the post-match reaction was so scathing.

"The saddest rugby test that has ever been played in New Zealand took place this afternoon," bemoaned the Saturday night edition of Dunedin's Star Sports.

Harsh. But that's what any boring northern hemisphere team deserves when it wins a rugby game through kicking, right?

Oh. Er, yes. It was actually the All Blacks who won, despite being out-scored four tries to none.

All Black fullback Don "The Boot Clarke" saved his side with six booming penalties, with the Lions responding through tries to Malcolm Price (two), Peter Jackson and Tony O'Reilly.

There was a prompt and caustic response from the tourists, the media and the supporters, with the general feeling being that the Lions were robbed, and that rugby had been the loser on the day.

There was condemnation of the referee, Dunedin bank manager Alan Fleury, even though it was later revealed he had awarded an even 20 penalties to each side.

In The Boot, written by Pat Booth, Clarke said the referee "did a great job that day. What was his reward?

He was crucified for the outcome. I believe that his decisions were the only ones possible".

The All Blacks were badly affected by first-half injuries to loose forwards Peter Jones and Brian Finlay. Clarke had 10 attempts at goal, and among his six successes were efforts from 46m and 41m.

Clarke again turned match-winner in the second test in Wellington, scoring a late try and adding the conversion. The All Blacks clinched the series in Christchurch, with the Lions avoiding a series whitewash with a 9-6 win in the fourth test at Eden Park.