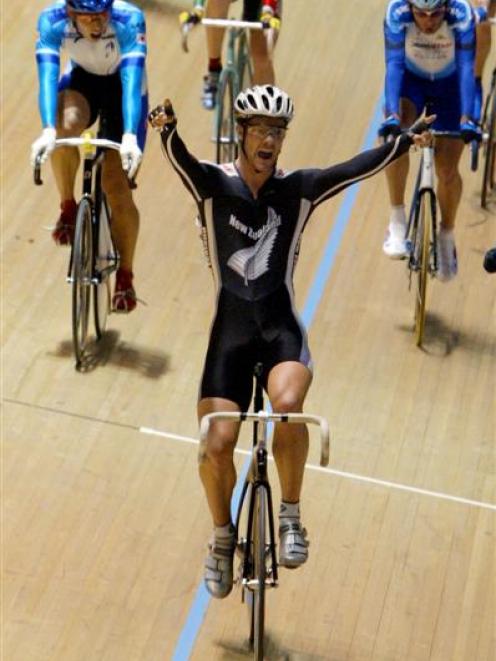 Greg Henderson celebrates after winning the scratch final at the 2004 world championships in Melbourne. Photot by Reuters.
Organised cycling has a unique tradition that ensures its world champions are never forgotten.

Any rider that claims a UCI-sanctioned world title may wear rainbow stripes on his or her racing jersey for the rest of his or her career.

That remains a source of pride for Greg Henderson, whose extraordinary career - which is still going - includes a world title won in the 15km scratch event in Melbourne in 2004.

"I could finish my bike-riding career tomorrow and be happy being world champion," Henderson told the Otago Daily Times after the world championships.

"I can wear the rainbow stripes on my racing jersey anywhere, including the Olympic Games, for the rest of my life."

Henderson and champion women's rider Sarah Ulmer won world titles within minutes of each other at the Vodafone Arena, just as they did when they each grabbed gold at the Manchester Commonwealth Games two years earlier.

After Ulmer had stormed to victory in the individual pursuit, Henderson - who had won the points race in Manchester - rode a tactically masterful race to win the scratch race by half a wheel from Dane Alex Rasmussen.

It was a stunning comeback for the Dunedin rider, who had been disappointed with his 12th placing in the points race.

"I was so upset after that ride I was almost in tears. I was about to chuck it [track racing] in, but it's amazing what a world title can do.

"I thought, I've got nothing to lose, so I'm going to attack it."

That attacking philosophy paid off for Henderson, who made an early solo break to burn off the bulk of his rivals.

That night, he fell asleep in his champion rainbow jersey.

"It wasn't coming off. I had it on all night when celebrating and came out the next morning with it still on."

Henderson, who had teamed with Hayden Roulston to win silver in the madison at the 2003 world championships, became the first New Zealand male to win a world track cycling title.

It remains the highlight of a glittering career, on both track and road, that may yet produce more silverware.

Henderson's achievements include four Commonwealth Games medals, a fourth place in the points race at the 2004 Olympics, two points victories in the Tour de Georgia, two stage wins in the Paris-Nice race, stage wins in both the Tour of Britain and the Tour of California, and 17 New Zealand titles.

Part of the powerful Team Sky line-up for the past two years, Henderson is joining the Lotto team next year.

A coveted spot in the Tour de France remains frustratingly absent, but Henderson's day in the great race may yet come.