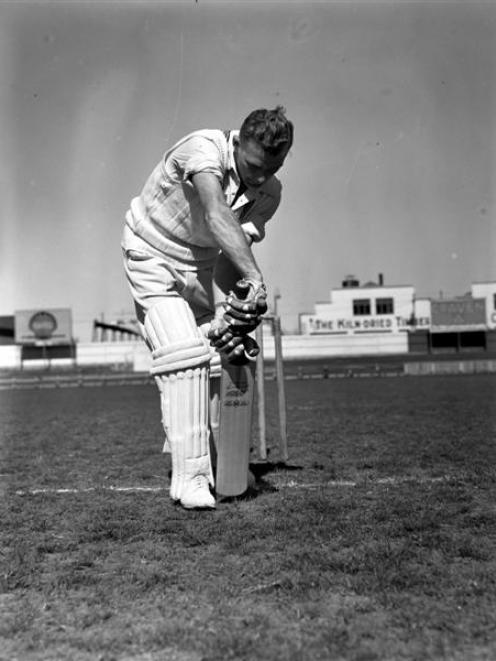 "It was a masterpiece, in pastel shades, on a huge, enduring canvas."

That is how the late Dick Brittenden described Bert Sutcliffe's finest hour.

Arguably, Sutcliffe's record innings of 385 against Canterbury at Lancaster Park in the summer of 1952-53 was the greatest innings played in the history of New Zealand cricket.

It was triple century number two for Sutcliffe and it eclipsed his own New Zealand first-class record total of 355 scored three seasons earlier.

Both were masterpieces but the second was even more astonishing given the circumstances. When you deduct Sutcliffe's contribution of 385, and the 29 extras conceded by Canterbury, the rest of the Otago line-up scored just 86.

The Canterbury attack could not find a way to remove the champion left-hander and struggled in the field.

Former Otago Daily Times writer Richard Boock, in his book, The Last Everyday Hero: The Bert Sutcliffe Story, tells how the Canterbury team supposedly came up with other "inventive tactics".

Sutcliffe was undefeated on 215 at stumps on day two and was so tired he could barely climb the stairs to his hotel room. A social creature, Sutcliffe was lured to a sing-along that night and is said to have returned home about the same time the milk man was doing his rounds, and just hours before the scheduled resumption of play.

The story has perhaps been embellished more with each passing year but what we do know for sure is Sutcliffe returned to the ground and continued on his merry way.

He hit 46 fours and three sixes in the wonderful innings which helped Otago post a first-innings lead of 191.

Canterbury was bowled out for a paltry 98 in its second innings and Otago won by an innings and 93 runs.

The Otago Daily Times described it as a "prodigious batting feat in which supreme artistry and absolute concentration brooked no bowler's attempt at domination".

"The spotlight never left Sutcliffe during the seven hours and 27 minutes he batted. He made it all look so easy, so simple, so prearranged that his colleagues appeared to be no more than items of scenery arranged as a background for the principal actor."

He offered half chances on 189 and 378, made that way only by some athletic fielding. When he was finally dismissed - cleaned bowled by Matt Poore, looking to whack the ball over the grandstand - everybody was stunned he could miss the ball having hit it so cleanly.