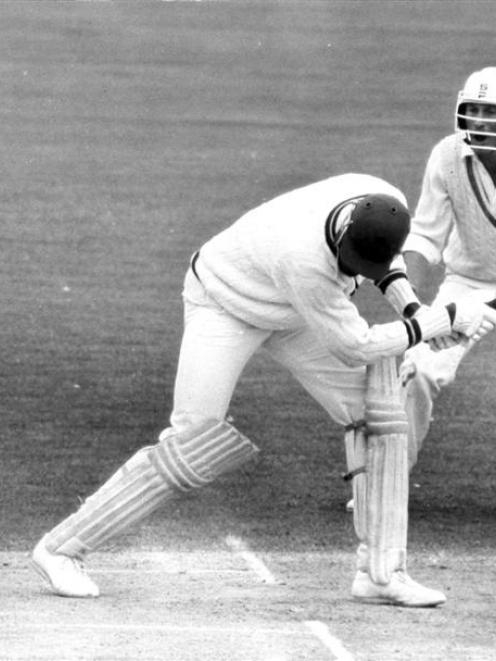 New Zealand fielder Stephen Boock looks on as West Indian batsman Joe Garner is bowled by Richard Hadlee at Carisbrook in 1980.
"It was a well-placed leg-bye," Stephen Boock said many years later, with a good measure of humour.

But New Zealand's dramatic one-wicket win against the West Indies at Carisbrook in 1980 was more memorable for another piece of footwork.

West Indies fast bowler Michael Holding kicked two stumps out of the ground in frustration when his appeal to have John Parker caught behind was declined.

The controversial moment set the tone for what is widely considered the most acrimonious series in New Zealand's test history.

Much of their anger was directed at umpire Fred Goodall.

Tempers bubbled over on the fourth day in the second test at Lancaster Park when Croft, who was running in to bowl, veered towards Goodall and struck him with his elbow. A day earlier, the team had staged a sit-down strike in a bid to have Goodall removed.

Ironically, Goodall was actually standing at square leg in Dunedin during the moment that seemed to trigger West Indies' slide into dissent.

It was umpire John Hastie who gave Parker not out despite the guilty-looking batsman fumbling nervously with his gloves, as if preparing to remove them for the march back to the dressing rooms. Enraged, Holding marched up the pitch and let the stumps have it.

It was not the only decision that the West Indies felt went against them. The visitors were convinced they had Lance Cairns caught behind as well.

West Indies manager Willie Rodriguez summed up the sentiment at the end of the game.

"I don't think that Parker and Cairns were out - I am sure they were," he said.

As for Holding's petulant outburst, Rodriguez said: "We have worked very hard for the reputation we have now as a cricket team. Some emotion must be shown. There is bound to be in the heat of the moment."

Controversy aside, the game was a cracking match. Chasing 104 for a rare win, New Zealand slumped from 40 for two to be seven down for 54.

What had appeared a small target suddenly seemed impossible against a hostile and aggrieved West Indies attack.

By the time Boock - the last man out of the shed - nervously joined Gary Troup at the wicket, New Zealand needed just four runs.

The smart money was on the opposition but the pair somehow scrambled the four runs needed, including the comical yes-no-wait-gee-that-was-lucky leg bye that won the game.