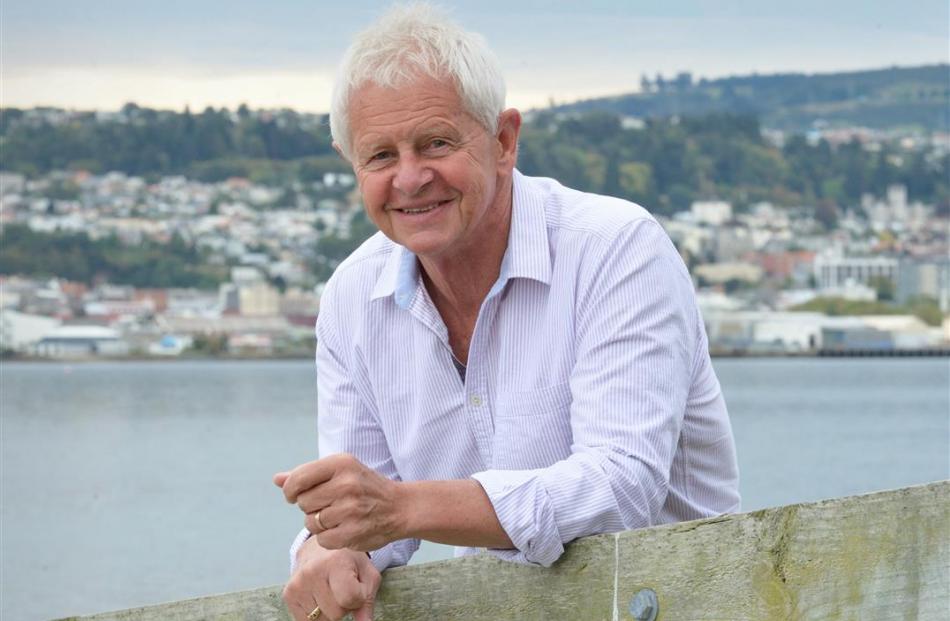 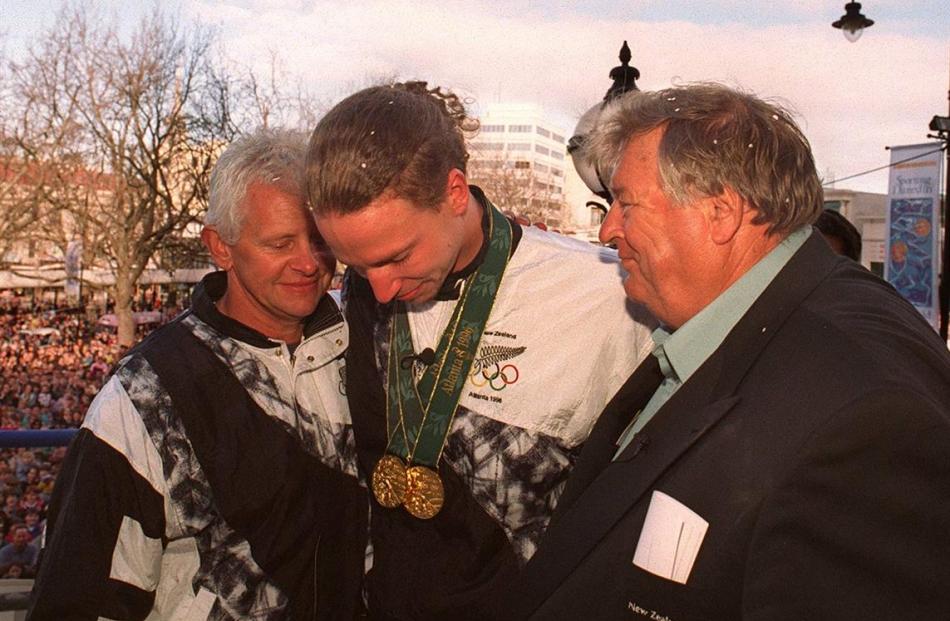 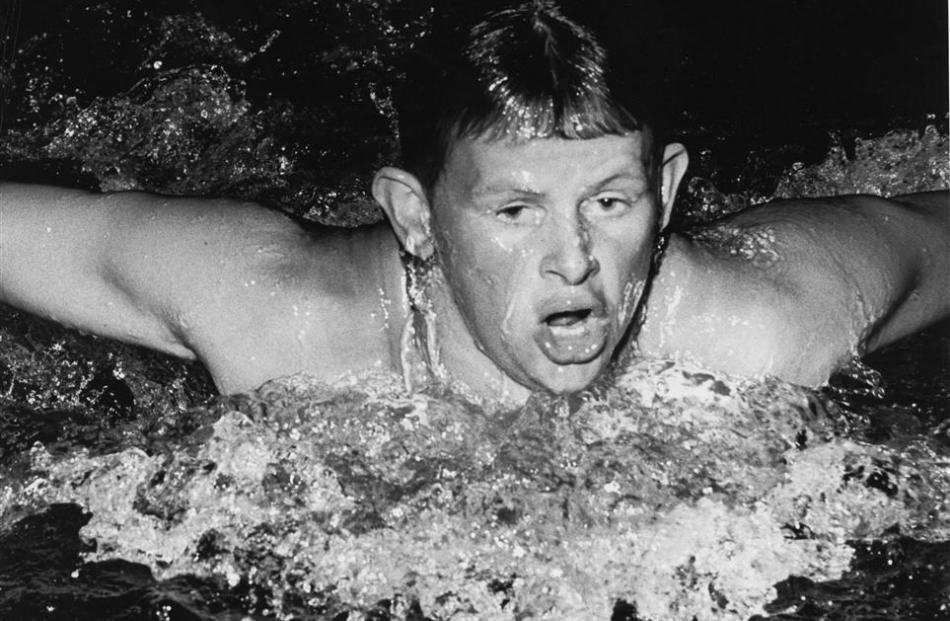 Training in Tokyo for the 1964 Olympics.

From winning gold in the pool at the 1966 British Empire and Commonwealth Games, to being appointed Chef de Mission at the 1996 Atlanta Olympics, University of Otago professor of medicine David Gerrard has seemingly done it all. Now, he has called time on his life in Dunedin and is moving to Auckland. Sports reporter Robert van Royen caught up with him yesterday.

David Gerrard can still clearly remember touching the wall to finish the 200m butterfly at the 1966 Kingston British Empire and Commonwealth Games.

He was not certain, but he had an inkling he had pipped Australian Brett Hill, who was over his left shoulder, for the gold medal.

He had to wait for what felt like an age for the timekeepers to check their stopwatches and confirm him as the winner.

"It was the days before electronic timing,'' Gerrard said.

"It was hand-held watches ... we had to wait. I remember staying in the water there and warming down a bit. It seemed like an eternity before they made a decision.''

It was a sweet victory for Gerrard (70), who reached the semifinals in the same event at the 1964 Tokyo Olympics, and also made the finals, but failed to medal, in the 100m and 200m butterfly at the 1962 Perth British Empire and Commonwealth Games.

While looking back at his decorated career in sport and medicine yesterday, Gerrard said it was "hard to beat a gold medal''.

He has retired after almost 50 years studying and working at the University of Otago, and will move to Auckland with wife Barbara in the next couple of months.

Gerrard was born in Auckland and attended Auckland Grammar, but he does not see the move as a return home.

He calls himself a true Highlanders supporter and 100% "true blue and gold''.

"Leaving here will be leaving behind 45 years of friendships,'' he said.

"You build up a wonderful body of friends and colleagues. To us, that's why Dunedin is the wonderful place it is.''

Gerrard first came to Dunedin to study physiotherapy in 1966, after realising he needed to look at a career outside sport, which was entirely amateur at the time.

While studying in the city, he met his Waimate-born wife.

They got married in 1968 and briefly moved to Auckland.

However, Gerrard wanted to become a doctor so they came back to Dunedin in 1971 to start medical school.

He graduated in 1977 and briefly worked as a house surgeon at Dunedin Hospital, before spending a few years as a registrar in Tasmania and Dunedin from 1978 to 1981.

Gerrard first started working at the University of Otago in 1981, when he started in the university's student health service.

Since then, he has worked in a variety of roles, including as a teacher and researcher in the medical school over the past 15 years.

By 2007, Gerrard had become the associate dean and associate professor of the school of medicine, before he was promoted to professor two years ago, his academic highlight.

He was also made a Companion of the New Zealand Order of Merit in the 2007 Queen's Birthday Honours. Gerrard has fond memories of Dunedin, including an occasion in 1964 before he lived in the city.

He had just returned from the Tokyo Olympics and was invited to attend a swimming meet marking the opening of Moana Pool.

It was held on the night of November 14, and Gerrard became the first person to break a national record in the new pool when he won the 100m butterfly.

While Gerrard was nominated to compete at the 1968 Mexico Olympics, he opted not to compete so he could concentrate on life after swimming.

But the sport has remained a part of his life ever since. He was on the International Swimming Federation's sports medicine committee for almost 30 years.

Gerrard was made a life member of Swimming New Zealand at its awards night in Auckland last weekend.

While swimming was his sport of choice, he also played rugby while he was at Auckland Grammar.

Only Commonwealth Games selection kept the halfback from making the school's first XV.

In addition to serving as a team doctor for Otago and the Highlanders the past 35 years, which he called a "labour of love'', Gerrard attended two Commonwealth Games (1982 and 1986) and the 1984 Los Angeles Olympics as a team doctor.

Gerrard performed surgery on yachtsman Sir Russell Coutts, who had painful boils on his bottom, the night before he won a gold medal.

This year's Rio Olympics will be the 10th Olympics Gerrard has attended - he has been to all of them since 1984 - most of them as Fina's medical commissioner.

"I have a secret ambition and a burning desire to make it back to Tokyo in 2020,'' Gerrard said.

"It would be wonderful to complete that Tokyo loop.''

While Gerrard is finishing up at the University of Otago and skipping town, he is not going to be entirely out of work.

He will continue as chairman of the World Anti Doping Agency's therapeutic use exemption committee, and in his roles at Fina's sports medicine committee, and as a doping adviser for World Rugby.

Gerrard was a doping adviser at the Rugby World Cup in New Zealand in 2011, and at last year's tournament in England, where no players tested positive to doping.

As Wada's TUE committee chairman for at least another year, Gerrard will travel to Montreal next week in preparation for the Rio Olympics.

"I guess what I'm doing, is I'm choosing to devote and dedicate my time to certain things,'' Gerrard said.

He admits leaving Dunedin will be "very sad'', particularly for his South Canterbury wife.

"I know for her it's going to be a huge wrench. But our family is in the north now and we feel the next stage of our growth and development is going to be with them and enjoying the five little blokes.''

Just when they leave town will depend on the sale of their Dunedin home, but they expect to be gone in the next couple of months.

However, Gerrard is keen to retain whatever links he can with the university.

"Who knows, if the opportunity arrises to come back and lecture, I'm always willing, provided someone feels like I can make a contribution.''

Gerrard's last game on the medical bench for the Highlanders will be against the Sharks in a fortnight.

David Gerrard
At a glance

• Competed at the 1964 Tokyo Olympics in the butterfly

• Won gold in the 200m butterfly and bronze in the 4x100m medley relay team at the 1966 Kingston British Empire and Commonwealth Games.

• Awarded an Order of the British Empire for services to sports medicine and sport Made a Companion of the New Zealand Order of Merit in the 2007 Queen's Birthday Honours.

• Promoted to professor at the University of Otago Dunedin School of Medicine in 2014.

• Made made a life member of Swimming New Zealand at its awards night in Auckland last weekend.

• Served as a team doctor for Otago and the Highlanders the past 35 years.

• Worked at the University of Otago since 1981.