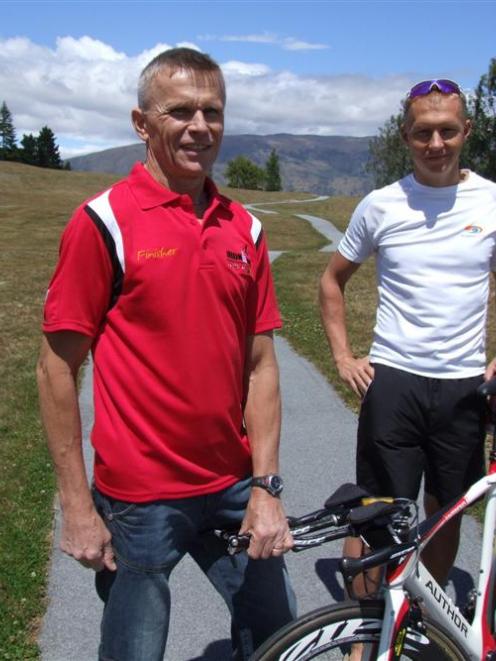 Miroslav Vrastil (58) has set himself a goal of finishing 22 Ironman races in 2010 - an average of almost two races every month, with each event consisting of a 3.8km swim, 180km cycle, and a 42km run.

Added up over the 12-month timeframe he has set himself, Vrastil's goal amounts to a total race distance of almost 5000km - and that is not even factoring in the training needed for such a feat of endurance.

Vrastil rowed at three Olympics (Munich 1972, Montreal 1976, and Moscow 1980) competing in the rowing eight for the Czech Republic and also the rowing pairs.

He was diagnosed with a cancerous tumour in his leg in 1981 and ignored the advice of doctors, who wanted to amputate his right leg at the groin.

He came back from the health scare to be selected for the Czech rowing team and compete at a World Championships, but was denied a fourth crack at the Olympics when the communist bloc countries boycotted the Los Angeles Games in 1984.

Vrastil says the inspiration for his world record bid of 22 Ironman races comes from his five children, for whom he wants to set a "good example".

"It was an idea and I thought why not? I was once told I would never walk again and at that point I thought to myself `one day I will make a world record'."

His eldest son also rows for the Czech Republic and competes in triathlons, as does his second-born eldest daughter.

Vrastil - speaking through his interpreter and Czech Republic compatriot Petr Vabrousek, an elite professional competing in the Challenge - says he is out to beat a world record of 20 Ironman races completed in a year by a Belgian triathlete.

The 2009 Guinness World Book of Records lists Luxembourg triathlete Jacques Fox, as the current record holder with 14 races, started in Malaysia in February, 2004 and ending in Hawaii, in November, 2004.

Vrastil is a former rowing coach of Vabrousek - himself a four-time competitor in the Challenge Wanaka, who finished third last year and first in the inaugural event, before he was disqualified for swimming with webbed gloves.

The pair have resumed their sporting connection on the international triathlon circuit.

Vrastil took up triathlons 10 years ago and completed his first long-distance event, the South African Ironman, two years ago.

His record bid will culminate with a gruelling four-race schedule over four weeks, which will take him from Florida to Arizona, and then Mexico, during November.

He plans to complete his world record in Perth at the Western Australian Ironman race in December.