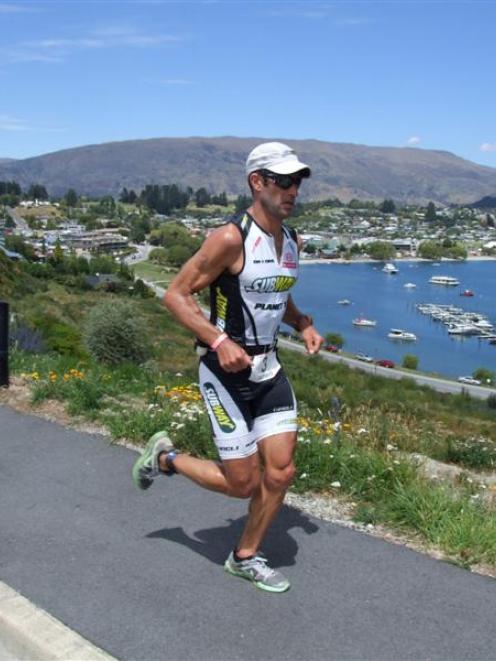 Winner Richard Ussher heads back to the transition point on the Lake Wanaka foreshore near the end of the first lap of the marathon run during Saturday's Challenge Wanaka.
Challenge Wanaka had its first pair of New Zealand champions on Saturday when Gina Crawford held on to claim her third title in a row after Richard Ussher had earlier smashed the men's course record by two minutes in his first appearance at the event.

The pair were too strong for their rivals, both establishing early leads during the 180km cycle leg then holding on through the marathon run, despite brave challenges from second place-getters Justin Daerr, of the US, and Rebekah Keat, of Australia.

Ussher's time of 8hr 34min 41sec took two minutes off the previous record - set by last year's winner, Chris McDonald, who did not return to defend his title.

Crawford (nee Ferguson) looked on target to break her own record, but stomach cramps caused her to slow down during the second lap of the run.

Crawford was among a leading bunch of athletes to exit the water after the 3.8km swim in Lake Wanaka, and her time of 53min 51sec outstripped Ussher's 57min.

Ussher exited the swim in sixth, but settled into his work during the first 40km section of the bike leg.

The three-time New Zealand Coast to Coast winner formed a group with Keegan Williams, of Cambridge, and Petr Vabrousek, of the Czech Republic, who were second and third in last year's race.

The trio hauled in early leader Bruce Fuller, of Australia, on the trip from Wanaka to Cromwell, then opened up a gap on the trip up Lake Dunstan to Tarras.

Daerr, who set a record time on the bike leg last year, was the only rider to stay within reach of the leaders as he battled on his own to try and haul them in.

Ussher opened up a gap on Williams and Vabrousek as the trio turned at Lake Hawea to head back to Wanaka and had established a lead of five minutes by the time he exited the transition area, after clocking the fastest cycle leg, 4hr 42min 26sec.

Crawford spent the entire race on her own after exiting the swim with a three-minute advantage over women's world No 2 Keat.

While many thought Keat would haul in the defending New Zealand women's ironman title-holder, Crawford powered through the cycle to extend her lead.

The Cantabrian's bike time of 5hr 17min 58sec gave her a five-minute advantage over her Australian rival, and as the pair headed out on the marathon the afternoon temperature hit 28degC.

Crawford appeared in control until the second 21km lap of the run, when stomach cramps forced several unscheduled stops, and Keat started to eat into her lead.

Crawford's determination saw her through to her third straight win as Keat came home less than two minutes behind.

The heat also took its toll on the men's leaders, as Daerr started to claw his way into contention, overtaking first Vabrousek then Williams, in a reversal of fortunes from 2009, when he was run down by the pair on the final lap.

He dashed hopes of a one-two finish for the Kiwis by surging past a fading Williams with less than 10km to go.

However, Daerr's run time of 2hr 49min 19sec - the fastest of the day - was not enough to catch Ussher, who ran on to the applause of the crowd and his first Challenge Wanaka win.