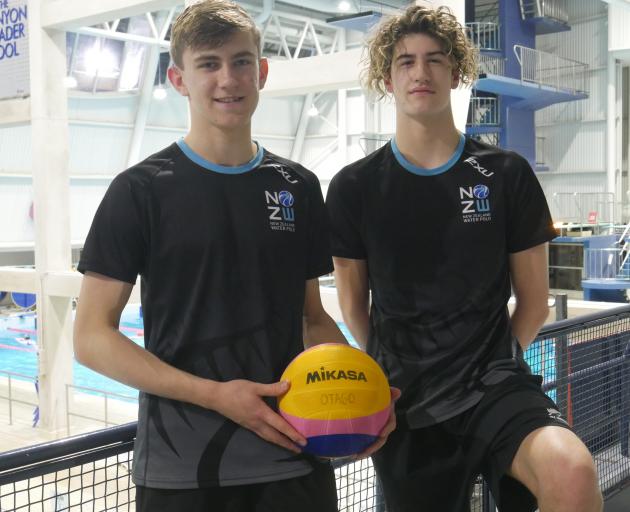 Otago water polo players Nick Taggart (left) and Nathan Martin have been named in the New Zealand under-18 men’s team, which will compete in Australia next week. Photo: Jessica Wilson

Two Otago water polo players have been selected in a national team.

Nathan Martin and Nick Taggart (both 17) have been named in the New Zealand under-18 men’s water polo team, after taking part in a trial about a month ago.

It is the first time either of them have made a national water polo team.

Nathan, a King’s High School pupil, said he was surprised to make the team, but also excited and nervous.

Nick, of Otago Boys’ High School, said he was ‘‘pretty stoked and excited’’.

Since last year, the boys have been part of a nationwide high performance programme which hosts camps throughout the year.

Nathan said the camps tested their skills, swimming and fitness.

The hardest part about the sport was the physicality and fitness required to swim up and down the pool.

He plays driver or wing.

Nick plays goalie and said the camps helped improve his reaction times, as he got to practise against players with a ‘‘strong shot’’.

The toughest part about being goalie was staying up in the water and always being ready for a potential shot from the opposition, he said.

The boys are also part of the Otago under-18 boy’s team, which leaves for Auckland tomorrow to compete in the four-day national championship.

There, they will play in a ‘‘pretty hard pool’’ which included two top Auckland teams, Nathan said.

They hoped to finish in the top eight. After that, they will meet their New Zealand team for a training camp before heading to Australia to compete in the Australian Interstate Championships.

The team, along with the New Zealand under-18 women’s team, will play Australian state teams.

Nathan said during the camp, the team would likely work on plays and a game plan.

Both boys started playing flipperball while at primary school, before taking up water polo when they were older.