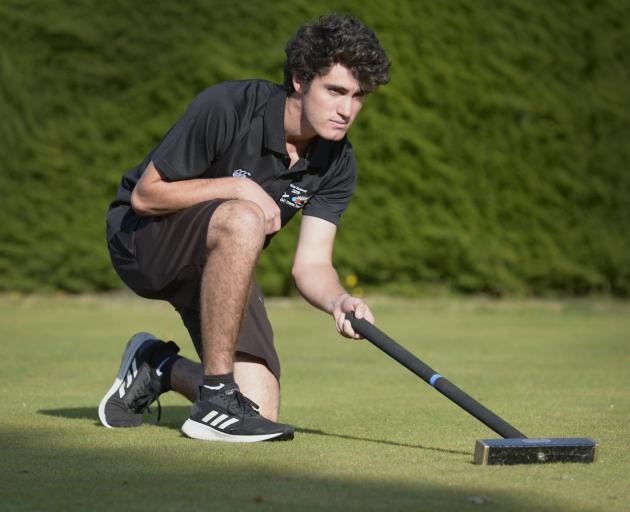 New Zealand golf croquet captain Felix Webby studies the line of a shot at Punga Croquet Club yesterday. Photo: Gerard O'Brien
There is a champion in our midst.

Felix Webby is one of the best golf croquet players in the world and has not long returned from a triumphant trip to Australia.

The trip will depend on whether he can get the time off from university, and boring realities like finances.

Then there is the world team championships - effectively the world cup of golf croquet - to look forward to. It is being staged in Nelson in February and New Zealand is the defending champion.

Webby is comfortably ranked inside the top 10 players in the world and has been ranked as high as No2.

The teenager is to golf croquet what Beauden Barrett is to rugby but without the profile and the pay packet. They are both from New Plymouth, though.

Golf croquet is not a sport that is on many people's radar, obviously. But Webby just loves it.

He discovered the game while attending a school programme about ''five or six'' years ago and ''kept going with it''.

It has bought him a lot of joy and the recent test series victory against Australia was another wonderful moment.

''It was a really close-fought test series and we came out on top by the slimmest of margins,'' he said.

The series involved three 16-game rubbers. New Zealand won the opening rubber 9-7 but lost the next 9-7. It led 8-7 with one match remaining in the decider.

That was a ladies' single match that was locked 6-6 before the New Zealand player eventually prevailed to clinch the series win.

Webby described golf croquet as a faster version of croquet. But he is not sold on its moniker.

''I think golf croquet is a bit of a bad name because it makes you think of golf and it is not golf.

''It is basically like [the difference between] pool and snooker. You have the same equipment, and many of the strokes are the same, but they're completely different rule sets.

''Golf croquet is generally thought to be like the T20 cricket version of the game. It is faster paced and a bit more interactive with the opponents.

''Croquet you play a turn and keep going until you mess up, whereas in golf croquet you have just one shot and then your opponent has a shot.''