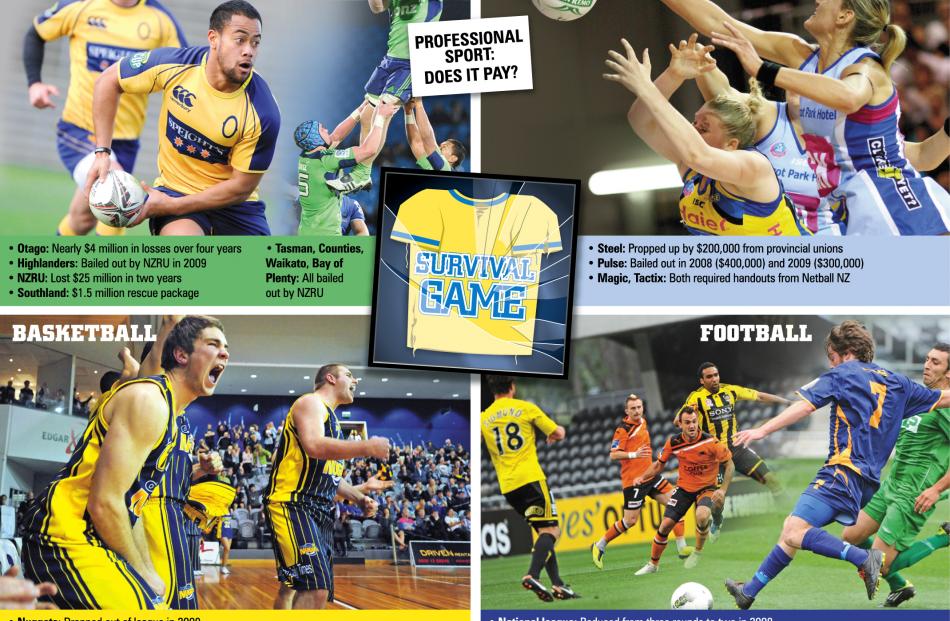 Doom and gloom in sport used to refer to Rugby World Cup droughts, or being bowled out for 26. Now it is more likely to refer to balance sheets and bad debts. Beginning our series examining the state of professional sport, sports editor Hayden Meikle gives an overview of the issues to debate.

It is tempting, but ultimately pointless, to play a localised version of the blame game when scrutinising the state of professional sport, and the organisations tasked with its administration.

By all means, castigate the Otago Rugby Football Union for getting itself into an appallingly bad financial state, and highlight the Highlanders' three-year NZRU bail-out.

But don't forget neighbouring Southland was rescued from its own $1.5 million hole, or that Tasman is still paying off an NZRU loan, or that Waikato could not pay the rent on its home ground.

While you're doing that, take a look at the NZRU's own books and note the massive losses it has sustained during the past three years. No wonder the national body flogs the All Black brand to all corners of the globe to anyone willing to open the chequebook.

Then there is netball.

Just this week, the Otago Daily Times revealed the Southern Steel had gone cap in hand to Netball New Zealand, seeking emergency funding, and had been propped up by loans from its provincial subsidiaries.

But the Steel looks like a model of efficiency compared to, say, the Central Pulse, the Wellington-based netball franchise that has been near death for four years.

Even the Waikato-Bay of Plenty Magic, the leading New Zealand franchise, has been forced to ask for assistance.

Otago United, representing Southern football in the national league, is no stranger to red ink.

But its struggles look decidedly minor next to the travails of erstwhile Phoenix owner Terry Serepisos, who ceded control of the club amid speculation he owed coach Ricki Herbert $100,000.

Finally, no talk of struggling sports organisations would be complete without mentioning the ultimate battlers, the Otago Nuggets. Their situation is much better these days, thanks almost entirely to supportive sponsor Oceana Gold, but the franchise's recent history of pauperism cannot be rewritten.

But bravo to the Nuggets for missing only one season, 2009, for funding reasons. Some New Zealand basketball franchises have gone completely bust (Northland Suns, Canterbury Rams, Auckland Stars).

You are probably getting the picture.

Leading southern sports organisations are facing tough times, but they are not alone.

So, to paraphrase legendary American coach Vince Lombardi, what the heck is going on out here?

Is professional sport in this country finished, or at least halfway there? Is our country simply too small to sustain so many professional athletes and teams?

Have a succession of greedy/arrogant/incompetent administrators and players taken YOUR teams and put them in grave danger of collapsing?

Or is sport, both here and north of the Waitaki, simply going through a recessionary period to match the pain being felt by other sectors?

Part of the problem in gauging the health - or lack thereof - of professional sport in New Zealand is the absence of a meaningful comparison.

Most of the high-profile sporting leagues we follow overseas operate on a scale so far removed from our own they are in fantasy land.

Those sorts of comparisons are fun, but meaningless. What about somewhere a bit closer in type? What about a country similar in population?

There are four professional rugby franchises in Ireland, and two have struck recent financial bother. Leinster won the Heineken Cup in 2009 and was rewarded with a loss of 350,000 ($558,000). Connacht, the minnow, runs a tiny squad, and went to the national union in December seeking help.

There is another reason it is difficult to say whether the parlous present state of many New Zealand sports organisations is a rot or a blip.

In professional terms, New Zealand sport is barely out of kindergarten.

Where English football and Australian rugby league and American baseball have had generations to become attuned to the demands and pitfalls of professionalism, the professional sports era in this country effectively started in 1995, when rugby took the plunge.

Teething problems were inevitable. Even 17 years on, it could be said we are still getting our collective head around professional sport.

Consider the many issues:
1. Societal change: The extension of the working week, the proliferation of new sporting options, busier lives in general, more entertainment options - all have had an effect on professional sport, as they have on the grassroots.

2. The recession: Possibly the biggest single factor in New Zealand sport's present difficulties. People are struggling to pay the bills, so how can they be expected to stump up for a ticket to the big game? Sponsors are dwindling, too.

3. Player wages: A hot topic, and one which will be investigated further next week. Too simplistic to say escalating wages are to blame, but surely they are a factor.

4. Television: Another massive change in sport, and another topic to come in this series. It has changed everything.

We want your thoughts on all of these issues. Email (hayden.meikle@odt.co.nz), write (Survival Game, ODT sports department, P.O. Box 517, Dunedin 9054) or go online (www.odt.co.nz), and a selection of reader contributions will be published next week. 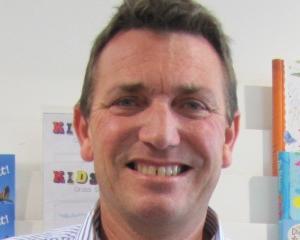