After stepping down as president of the Otago Rugby Football Union on Monday night, Adrian Read has finished a rugby administration career that lasted nearly 40 years. Rugby writer Steve Hepburn talks to Read about his time on committees and behind the scenes. 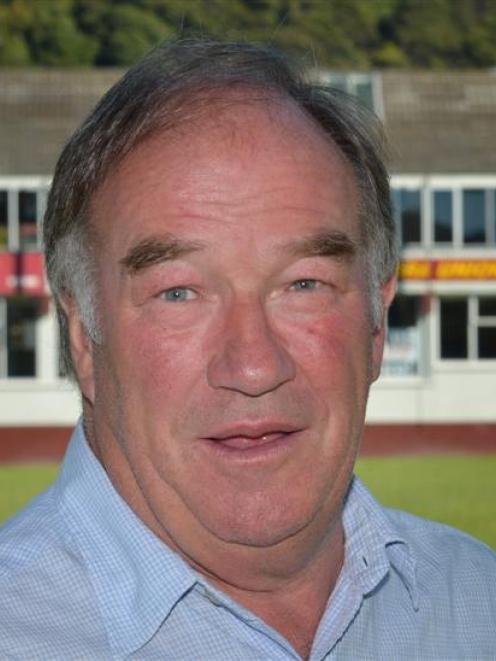 Adrian Read at Alhambra-Union's North Ground. Photo by Peter McIntosh.
Adrian Read has been at the coalface of Otago rugby for 20-plus years.

Seen Bledisloe Cups won and Springbok heads attained, and watched the Highlanders host finals and then nearly head out the back door.

From the Otago union having a staff of three, then 36, to then all but going bust.

Read has been an ever present figure in and around rugby in Otago.

But he will head to Wanaka in a few weeks, into retirement, and will no longer hold any official rugby titles.

It has been quite a journey for Read, one that started when he first played for Union in the late 1960s.

He was a front rower for second-grade sides and went to Fiji on a club trip in 1975. When he got back he was asked to join the club's committee, and that is when his administration career started.

''I just got asked to join the committee one day, as you do, and it just went from there. I was assistant secretary for the club but the secretary left after three months so I got that job.''

He was chairman of the club for a decade, including the period when Union joined with Alhambra in 1987.

''With Union we only had one ground to train and in the middle of winter it was a quagmire. So we were looking around for somewhere to train, maybe buy some land up in Pine Hill.

''Alhambra were about to be dropped out of club rugby so we thought about having a crack at amalgamation. It had been tried twice before and failed but we managed to get it through.''

Read, who turns 64 next month, failed twice to get on to the Otago union's management committee but succeeded in 1993.

He joined an active committee.

''In those days we had the groundsman, John Hornbrook, who looked after everything, and the secretary. That was it.

''That was the year of the first big Bledisloe Cup test at Carisbrook and as part of the management committee, you had to do a lot of the work.

''On match days you had to get in there early. I was in charge of looking after the media, and the visiting media, in charge of all the programmes, the pre-match entertainment, the halftime entertainment. It was full-on. You would get to Carisbrook at 10 in the morning and be there for 10 hours.''

The following year, Otago beat the Springboks at Carisbrook - another highlight for Read.

''It was a really wet day and I was walking around with a big coat on, really busy. Then this wee Scottish guy, who used to work for the TV, [was] lurking around. He waved me over. I took my jacket off and it felt like a weight had been lifted off my shoulders.

''We went into a dug-out at Carisbrook and he got the whisky bottle out. So we spent most of the first half drinking wee drams. It was his way of relaxing and it helped.''

The winning of the game led to a great night, Read said.

A couple of years later, professional rugby arrived in New Zealand and that would greatly change the landscape.

Staff did many of the jobs that volunteers used to do.

''I think, in hindsight, everyone thought `This is professional, so we have to do it big, as that is how they do it overseas'.

''I always remember an American coming into work around that time. He asked me how many teams we were having in New Zealand, how big was our region, what sort of crowds we got.

''He said it won't work. He came from a city of four million people that had one sports team and they struggled to survive.

''We are always going to battle down here. It is hard. But we can retain the franchise. Canterbury don't want to be the only franchise in the South Island.''

Professional sport meant more staff and chief executives who ran the organisations, and had a big say.

''That was a model that was foisted on us by New Zealand Rugby. But it probably went too far. Many of the CEOs did not make wise decisions. Did not just look at the books.''

It became a game of one-upmanship between chief executives, and unions suffered.

He said Otago separating from the Highlanders was one of the best things to happen to the Otago union.

Although he did not have a lot to do with players, he said expectations had changed markedly.

''I sort of blame the expectations they get from schools. They come out of these first XVs and think they're going to get a fulltime job in rugby. They think they can get straight into Super 15 sides.

''But it doesn't happen like that. We have changed that a lot with Otago now. We are starting to deal with the players direct a lot more now, cutting the agents out of it.

''I remember Brian Lima coming in and we fixed up a car for him. We got him a four-cylinder Commodore. But he wanted a V8. I said he couldn't have one.

''So he drove it all the way out to the airport and back in second gear and ruined it so he could get another one.''

Read said the game became almost financially unsustainable but had been reined in over recent years.

The financial meltdown of the Otago union a couple of years ago was tough to take, he said. No-one had seen it coming.

''What he [Graham] did was all that could be done. He wanted to get rugby back to a business model that could be sustainable. If that meant going out of business, then so be it. Luckily it did not come to that.''

People at the Dunedin City Council ultimately paid for a loose arrangement over the value of Carisbrook, he said.

The union had come full circle: it started with fewer than half a dozen employees and was now back at that number, when once it had been above 30.

Read was on the management committee and then the board of the union for 20 years, serving under six chairmen. He rose to be deputy chairman, and then president for the past two years.

Through it all, Read, who has finished up at Rhodes Rentals, where he worked for many years, has maintained a love of rugby.

''It is about the camaraderie. The people you meet. I remember taking my son to an under-15 tournament in Auckland in 1998.

''We won the national tournament against all those big schools from up north. That was great. They had a reunion 10 years later and they still all got on great.''