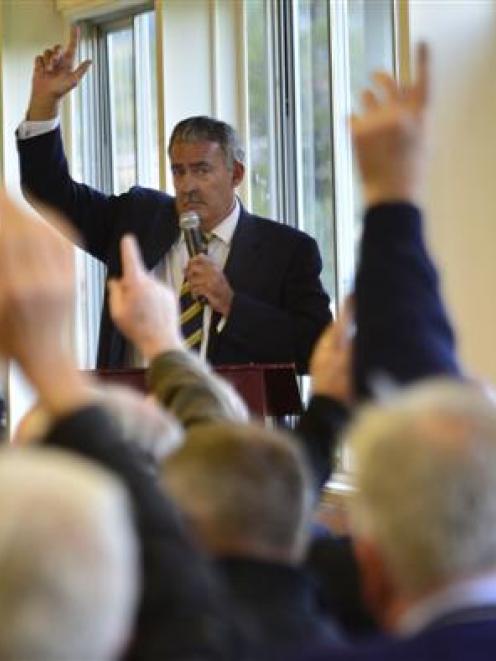 ORFU board chairman Doug Harvie is one of the supporters of club affiliation fees, which delegates at the union's annual general meeting last night at the Alhambra-Union clubrooms voted to bring back. Photo by Peter McIntosh.
Affiliation fees will be imposed on clubs throughout the province as the Otago Rugby Football Union faces a funding shortfall of more than $300,000 this year.

At the union's annual meeting last night, delegates voted to introduce the fees which will be levied on senior and colts teams but will not be paid by school sides or junior teams.

The fees had been previously imposed by the union but were dropped in 1998.

However, with the union facing tough financial times it proposed to bring them back in.

There was some opposition to the fees. University club captain Trevor Turner said clubs were struggling to find money and he felt the union had a greater ability to generate revenue.

Pirates club captain Mark Howat said he felt there had been poor communication from the union to the clubs about the fees and budgets had already been set by his club for the coming year.

Union general manager Richard Kinley said his job was to make the union sustainable which was tough in today's climate.

''In the budget for the coming year we have a $350,000 shortfall which we need to find. Community rugby does not run at a profit,'' he said.

He later qualified that shortfall by saying that did not include any money which might come in from unsecured trust funding or commercial sponsorship.

''Right throughout the country other unions charge affiliation fees as do other sports.''

He said football players paid $88 to Football South and some of that then goes to New Zealand Football.

''Hockey, netball, all other sports have affiliation fees. We have to balance some level of income to support community rugby.''

He said last year the union made $41,000 from gate takings at ITM Cup games and it was unrealistic to think they could charge much more for that.

He said trust funding was ever decreasing but more and more organisations were seeking funding from it.

Board chairman Doug Harvie said there had been significant cuts in player salaries and it ''would be fair to say we are not that popular with some players''.

Harvie said the union would not spend money it did not have.

Harvie had written in his report to the meeting the union was spending too much money on the ITM Cup team and felt it had to be reduced.

It cost $1.33 million to run the ITM Cup team, which was about half of the union's gross revenue.

If the fees were not accepted, some reductions would have to be found in the budget which might include the cutting of some representative programmes for age-group sides.

Board member Andrew Rooney said separate accounts were set up for community rugby and the professional ITM Cup team and the money could not be switched between them.

Rooney was re-elected to the board along with Steve Quin, of the Taieri club.

John Faulks did not seek re-election.

Under the new constitution brought in last year, the clubs do not have a say on the new board members.

The board members are voted on by a panel.

John Dowling and Ross Dykes were the only nominees to again sit on the independent panel which picks the board members.