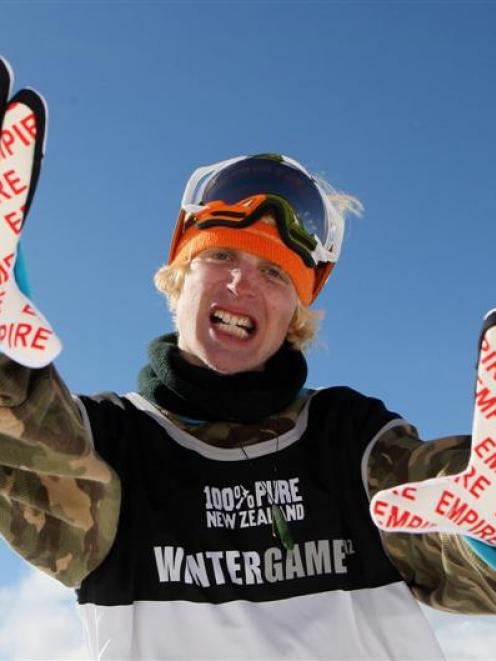 Taylor Seaton, of the United States, who won the men's event. Photo from Getty Images.
New Zealand's hopes in the Winter Games freeski halfpipe crumbled at Cardrona Alpine Resort on Saturday, as respective injury woes and a crash put Jossi and Byron Wells out of contention for a home title.

The brothers' demise left the door open for unheralded United States freeskier Taylor Seaton to win the men's competition, while Switzerland's Mirjam Jaeger was head and shoulders above the women's field.

Seaton seemingly came from nowhere to claim his first major competition title, 10 days after a wildcard entry at the New Zealand Freeski Open at Cardrona.

The 19-year-old qualified for the finals in top spot, then finished second behind Jossi Wells, who claimed his maiden New Zealand freeski halfpipe title.

On the penultimate day of the Winter Games, it was Seaton who celebrated a win, as Wells bowed out of the halfpipe early in his first run when his injured knee failed to stand up to the rigours of competition.

A clearly disappointed Wells abandoned his second run, limping away from the competition, after bravely attending with an injury sustained during a silver medal performance at the Winter Games slopestyle last week.

"I knew after the first hit that it wasn't going to hold up," he said.

Seaton commiserated with his friend.

"It was a real bummer to see him hurt his knee on his first run," Seaton said.

"I really like skiing with him. His style and overall performance is awesome, but I'm stoked to have the win myself."

Seaton's amplitude and control through the air in "scary" high winds enabled him to hold out his compatriot, David Wise, and reigning Winter X Games halfpipe champion Xavier Bertoni, of France.

Byron Wells crashed out and appeared to hurt his shoulder as he pushed his chances in a second run, trying to overtake the leading bunch.

Wanaka skier Lyndon Sheehan was left flying the New Zealand flag, and once again turned in a good performance for fifth place - the same position he claimed in the New Zealand Freeski Open.

He finished ahead of Byron Wells (11th) and a third brother, 13-year-old Beau James, who was 15th.

Sheehan's sister, Amy, impressed in the women's competition, where she seemed unlucky to finish in sixth place after her pair of runs.

She was surpassed by fellow Wanaka and Cardrona freeskier Janina Kuzma, who finished fifth and was the top New Zealand female in the competition.

However, the pair were outclassed by the performance of Jaeger, who was a step above the rest of the women's field in her return to competition from an injury lay-off.

"I had knee surgery six months ago and it was my first day back skiing in the pipe, so I couldn't really throw all the big tricks I wanted," Jaeger said.

The Swiss skier's amplitude through the air gave her a five-point advantage over the field, with Canadians Rosalind Groenewoud and Dania Assaly completing the podium.