All Black Ben Smith and Highlanders coach Jamie Joseph also picked up awards, as the Highlanders' achievement in winning the Super rugby title in 2015 led to the side being awarded the supreme prize.

The Highlanders were picked by absolutely no-one to win the Super rugby trophy at the start of last year's competition but came through thanks to some electric back play and gritty performances by the side's forwards.

It is the first time the Highlanders have won the award, after a tweak in the qualifying criteria allowed regional sides to be entered.

Joseph has coached the team for five and a-half years and will leave to coach Japan after the finish of this year's Highlanders season.

He won the coach of the year award, ahead of some other quality coaches.

When Joseph arrived at the Highlanders at the end of the 2010 season, the franchise was in disarray. But he turned it around, climaxing with the victory in the final of last year's Super rugby competition.

Captaining the side was Smith, who won the sportsman of the year award last night.

The loyal Otago man was the co-captain of the winning Highlanders side, sharing the reins with Nasi Manu.

Smith then went on to be the starting fullback for the All Blacks in the side that successfully defended the World Cup in England last year.

Smith (29) also won the Halberg Award as part of the World Cup-winning side.

Leadership and talent are the hallmark for cricketer Suzie Bates, who won the sportswoman of the year award.

As captain of both the Otago Sparks and the White Ferns Bates carries a lot of responsibility, but her results this season have shown she handles the skipper's arm band with plenty of grace.

It was a repeat win for Beau-James Wells in the junior sportsman of the year award.

A highly successful international season was capped by Wells winning the junior world championship halfpipe title, and finishing the year ranked third on the Association of Freeski Professionals in a field of 1200 skiers.

The young motocross rider went straight to the top at her first women's motocross grand prix event at the Qatar World Championship, winning both events, and followed this up with first and fourth places in the Netherlands in round two.

The services to sport award was given to golf stalwart Bill Trewern.

Trewern, the longtime Otago Daily Times golf writer, has been involved in and around junior golf since he was a junior himself.

His love of the game shone through and it is his hard work and dedication to the game that has led the sport to many successes over the years. He was made a life member of Golf Otago last month.

The innovation in sport award was given to the developers of the Alps 2 Ocean Cycle Trail.

This trail starts at Mt Cook and finishes at Oamaru, taking visitors through some spectacular natural landscapes and wildlife right down to the sea at Oamaru.

The awards were sponsored by ASB.

"Many of our top athletes will never represent Otago once they are international stars. Competing at that elite level is a fulltime job for them,'' Brimble said.

"If you are in the Rowing New Zealand elite programme, you have to be in Karapiro, period. Our top cyclists will have to go to Cambridge. It's going to get worse with funding squeezed, so we need to think about how we define an `Otago' athlete.

"That's one reason it's so important to keep developing our young talent, and recognising them at opportunities like this one. 2016 has seen our franchise teams like the Highlanders, Steel and Southern United becoming eligible for consideration for the awards.'' 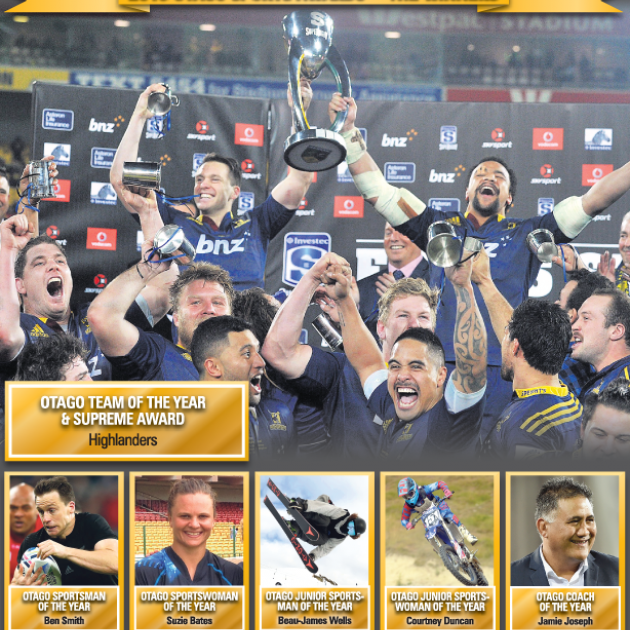