Swimming: Breaststroke record a step on path to Rio 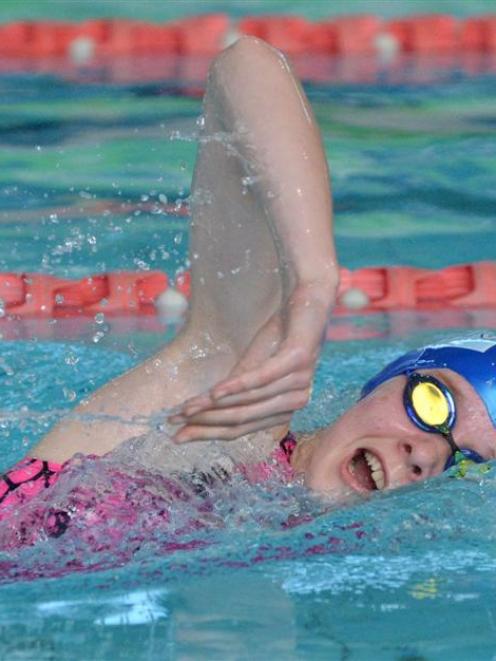 She was competing with 353 swimmers at the 30th annual Neptune Queens Birthday Swimming Carnival.

Wilson joined Otago swimmers Danyon Loader and Scott Cameron at the Atlanta Olympics in 1996. It is Lloyd's goal to represent New Zealand at the Rio de Janeiro Olympics in 2016.

National Masters records are broken from time to time but records in other grades are rare.

But she has just returned home from a holiday in the United States and did not expect a record at this time.

''It's pretty exciting to get a record at a meeting like this,'' Lloyd said.

''It's another step forward to my big goal of going to the Olympics.''

Lloyd broke her first New Zealand record at the age of 12 and this was her seventh.

''Natasha's got the potential to go all the way,'' she said.

Lloyd begins a four-year swimming scholarship at the Auburn University, Alabama, in the United States, next January.

Kate Godfrey (Neptune) gained the most points in the senior women's grade with 86 points and was followed by Lloyd 70 and Kelly Scammell (Aquagym, Christchurch) 51.

Godfrey (19), who is in heavy training for next month's World University Games in Russia, won eight women's senior events.

She beat Lloyd in three events but the most significant was in the 200m individual medley that she won in 2min 16.17sec. Lloyd was timed at 2min 21.32sec.

She blitzed Batchelor by six seconds when she won the 200m backstroke in 2min 13.27sec.

He was the dominant male swimmer and won 10 events. This included breaking Matthew Glassford's Otago senior men's record in the 100m breaststroke.

Crosland broke the record in the heats with 1min 03.96sec and lowered it again in the final with 1min 02.98sec.

His other top performance was in the 100m freestyle that he won in a personal best time of 50.43sec from Tyrrell (51.62sec). That record is held by double Olympic gold medallist Loader.

Tame Govaerts (Zenith) took the record with his heat time of 1min 05.47sec. He held it for three minutes before Courtland Ellis (Neptune) broke it in the next heat with his time of 1min 05.02s.

The other Otago record at the championship went to Jack Divers (Neptune) in the boys aged 10 and 11 breaststroke (1min 26.52sec.).