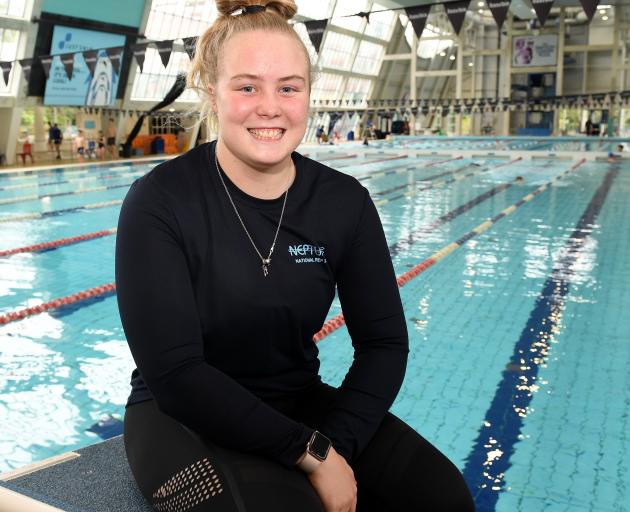 Dunedin swimmer Madison Wills is ready to trade Moana Pool for the University of Wisconsin-Milwaukee in the United States. PHOTO: STEPHEN JAQUIERY
Madison Wills would have had every right to feel unlucky growing up.

Had she been born in any other year, she would likely have a lot more gold medals to her name.

Yet being in the same age-group as a teenaged Olympian has not been all bad.

Erika Fairweather may have, more often than not, won the head-to-head race between the pair, but the long-term benefits of having a rival close at hand have helped push Wills.

And that is the way she looks at it.

There was no hint of resentment from the 17-year-old when the topic was broached.

Now, she is preparing to make a splash of her own.

The former Otago Girls’ High School pupil has signed to swim at the University of Wisconsin-Milwaukee, an NCAA division one school in the United States.

"It’s definitely pushed me to get better," Wills said of being in the same age group as Fairweather.

"She’s honestly a huge inspiration of mine. She works so hard in and out of the pool.

"It’s been a blessing in disguise to be in the same age group as her, to always have her there.

"But our age group is so competitive all around New Zealand, probably one of the hardest age groups to be in right now."

Wills leaves for the US in August and is excited to get there.

She had connected with the sports management recruiting team and sent both her best and recent times to coaches.

From there she landed with Wisconsin-Milwaukee.

Despite not having visited the university, or been to the US, she had spoken with others on the team and they "only said good things".

Wills would swim in the 400m IM and the 200m breaststroke — the discipline in which she has excelled the most at national level and holds eight Otago long-course age group records.

She said the college system was "so big", and that had been a major attraction.

However, she felt well-prepared given the quality of competition she regularly faced in New Zealand, as well as the quality of the Dunedin training programme.

The move was one she still hoped to benefit from, though.

"They have very consistent training and all that kind of thing, all the right resources and they’re very structured with what they do. There’s so much help with every aspect of the sport. It’s pretty cool."

Wills began swimming at a young age in Alexandra, before beginning to take it more seriously when moving to Dunedin, aged 6.

She progressed through the Dunedin swim squads and has been part of the A squad for the past five years.

In 2018, she was a member of the New Zealand team that competed at the Australian state team age group championships.

She has also been a regular among the medallists in her age group at national championship events — particularly in the breaststroke.