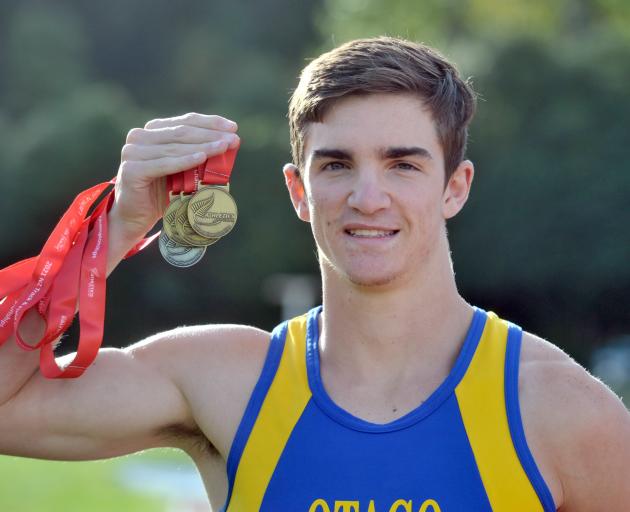 Shay Veitch yesterday shows the four medals he won at the national track and field championships in Hastings at the weekend. PHOTO: LINDA ROBERTSON
Four medals and his sights set firmly on Birmingham.

Shay Veitch could hardly have had a better weekend at the national track and field championships in Hastings.

He was also part of the 4x100m relay team to win silver.

They were wind assisted, but his wind-legal 7.71m also equalled the Otago senior men’s record.

Next year’s Commonwealth Games in Birmingham is now his goal.

To get there he will likely have to jump close to, or further than, the New Zealand record of 8.05m, set by Bob Thomas in 1968.

While improvements tend to come at slower rates as you progress, Veitch has found plenty of distance each season.

Last summer he passed 7m in only three of his 16 competitions. A year on he has jumped a minimum 7.60m in every competition since late November and exceeded 7.70m four times on Friday.

It gave him the confidence he could add the distance he needed and he knew where the gains would come too.

"Looking back, my coach [Michael Beable] was saying the same things. On the runway I had much more speed than I’m used to, which sort of threw off a few things," Veitch said.

"So there’s easily a few technical aspects I can work on, as well as some strength aspects.

"It’s nice to know exactly what I have to do and I know how to do it.

"So I’m looking forward to in a year’s time coming back to nationals and seeing what I can do."

The fact he is still relatively new to the sport at this level is perhaps a factor in that too.

Veitch has only had four serious seasons of athletics.

His breakout competition came at the national secondary school championships in 2018 at the Caledonian Ground.

On that occasion he came from nowhere to win gold with a jump of 7.11m.

Up until last year he was very much self-made too, training himself over the winter.

It was that work, alongside Beable’s influence, that he credited for his rise.

"I like to say I’ve done eight years work in the last four years.

"I think my strength is being able to work all the way through winter, no complaints, no making excuses for myself.

"I think that’s where I make up most of my ground.

"I always tell people you set your potential in the winter and you reach it in the summer."

He also hoped to bring some consistency to his 100m times and push for a spot in the New Zealand 4x100m relay team.

While he won the gold medal at the weekend, his main competitors for the relay team were not present.

Veitch hoped to get to Australia for some competitions next year.

But he was not planning to move away.

Alongside being in the second year of a biomed degree, he was also happy with the set up and his coach in Dunedin.