Wanaka two-year-old warms up for nationals 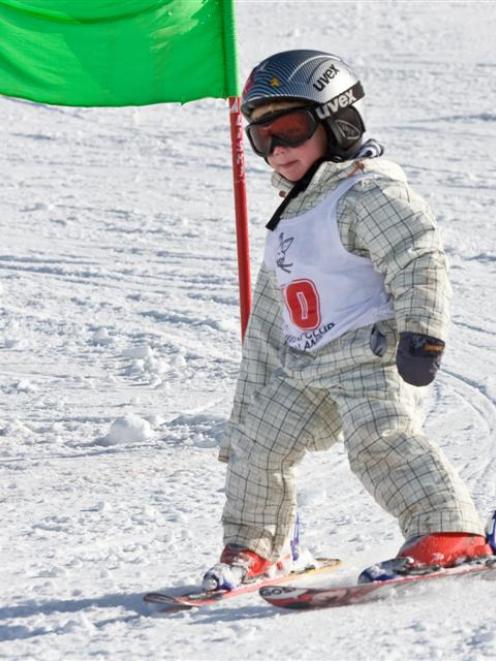 Two-year-old Gustav Legnavsky is a young gun on the snow at Cardrona Alpine Resort. Photo by Jan Vokaty.
Tiny tearaway skier Gustav Legnavsky could well grow up to become a giant of New Zealand sport.

The 2-year-old has turned heads on the ski slopes at Cardrona Alpine Resort throughout the season and will be the youngest competitor in the halfpipe event at the junior nationals next week.

The Wanaka toddler is capable of skiing advanced runs, terrain parks, and mountain features that would discourage most people.

At an age when most children are putting their parents through the terrible 2s, Gustav is instead taking on the 5.7m-high walls of the Cardrona superpipe.

His parents, Pete and Bridget, said the super active toddler had a sports box at home, rather than the average toddler's toy box.

He can already ride a bike - without trainer wheels - has his own skateboard, likes to roller-blade around the house, and plays golf.

"He's not a uniquely talented kid or anything," Mrs Legnavsky claims.

She puts Gustav's development and early interest in skiing down to the "interesting lifestyle" the family leads, which gives him opportunities many other children do not have.

It could also have something to do with the family genes. The Legnavskys' ski industry careers have taken them around the world.

Mr Legnavsky, a free-ski coach originally from Slovakia, has spent the past 10 years teaching at Cardrona.

Mrs Legnavsky, raised in Tekapo, is the snowsports manager at the skifield.

When the Otago Daily Times visited Gustav, the toddler had one thing on his mind.

"I want to go skiing," he said, venting his frustration at the blizzard-like conditions at Cardrona, which had kept him in the skifield creche all day.

Mrs Legnavsky says instead of playing baby games the family goes skiing together.

The goal is to have fun and set Gustav up with the alpine skills and opportunities that "European kids" grow up with when surrounded by snow.

"Sometimes he's out there ski-ing with a dummy in his mouth . . . chasing the other kids around. He only goes skiing when he wants to."

With other Wanaka-raised snowsports stars, such as the free-skiing Wells siblings, starting the sport early and going on to compete at international level, little Gustav could one day be New Zealand's next twin-tipped riding talent.