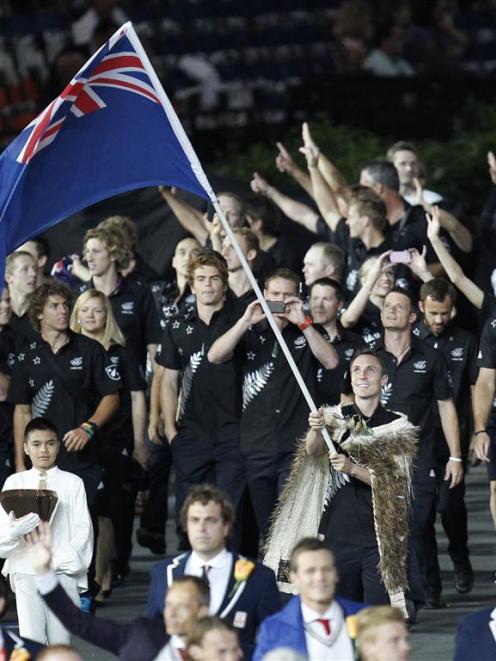 New Zealand's flag bearer Nick Willis holds the national flag as he leads the contingent in the athletes parade during the opening ceremony of the London 2012 Olympic Games. Photo by John Sefton/NZ Herald
New Zealand has been welcomed to Britain's 2012 Olympic Games, with a proud Nick Willis leading the Kiwi team into London's Olympic Stadium after an action-packed opening ceremony.

Willis and the rest of the 184-strong New Zealand team of athletes smiled, waved, took photos and filmed footage as they strolled into the stadium after the spectacular opening ceremony.

Solving the last remaining riddle of the opening ceremony, the seven teenagers were given the honour of lighting the Olympic cauldron in the symbolic start to the 2012 London Games.

The young athletes, each nominated by a renowned British Olympian, lit a single tiny flame each within a copper petal on the ground, which triggered the ignition of more than 200 petals. The petals then rose towards each other to form one flame, described as a flame of unity.

The lighting of the cauldron holds huge symbolism within the opening ceremony as the flame burns above the stadium for the duration of the Games.

The arrival of the flickering torch into the darkened stadium carried by five-times Olympic champion Steve Redgrave was greeted by a huge roar, bringing to an end a 70-day, 8,000-mile journey around some of the most famous landmarks in Britain where it was cheered on by millions of people.

It had earlier been driven up the Thames in a speed boat by former England soccer captain David Beckham.

The choice of teenagers for the final stage marks a change from recent Games where some of the world's most famous athletes have carried out the lighting.

Chinese gymnast Li Ning lit the cauldron in Beijing in 2008. Raised into the air by wires, he ran around the rim of the stadium roof before lighting a wick which carried the flame to the cauldron.

Windsurfer Nikolaos Kaklamanakis lit the cauldron in Athens in 2004, 400-metre runner Cathy Freeman walked through a circular pool of water to light it in Sydney in 2000 and boxer Muhammad Ali did the honours in Atlanta in 1996.