By Mike Houlahan
0 Comments
There were not that many people cheering when Moment of Kaos won race 6 at Forbury Park last night.

It was a special moment for driver Jonny Cox, though, who has been coming to the South Dunedin harness racing track all his life, following in the sulky tracks of his grandfather and father, trainers both. 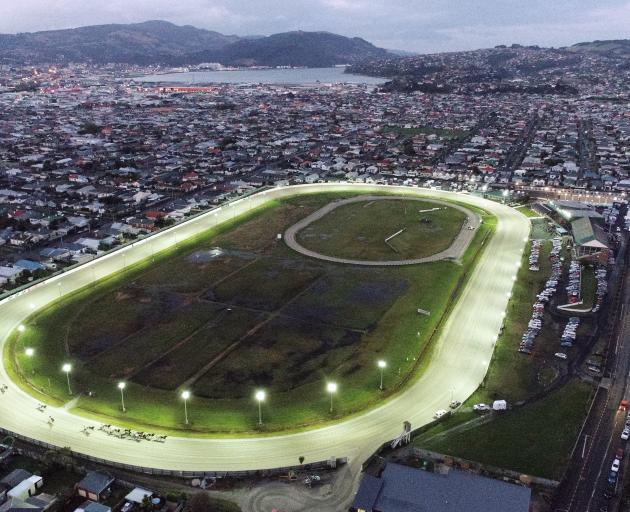 Horses thunder around the Forbury Park home bend as action gets under way on the last night of harness racing at the South Dunedin venue. PHOTO: STEPHEN JAQUIERY
"Coming here with Dad, it was always packed and then the numbers dwindled down and hardly anyone would come, but it’s great to see a crowd like there is tonight to say goodbye."

Cox, who has driven more than 100 winners at Forbury, has more reasons than most to mourn the track, which last night closed as a harness racing venue after 150 years.

As well as with Moment of Kaos, he was successful in race 8 with Dashtothebeach for the same trainer, Bruce Negus.

The venue was jam-packed last night as people farewelled Forbury, so full that entry to some bars had to be restricted to comply with fire regulations.

Brothers Warren and Lester Mathieson grew up going to Forbury, as dad Fergus, a Smaills Beach trainer, brought many horses to the track.

They were philosophical about the end of an era.

"It’s sad to see it go but life moves on," Warren, who wore Fergus’ life member and stewards badges for the occasion, said.

Lester, who drove some of his dad’s horses to victory, was happy to be in the stands last night.

"We’ve been here any number of times for trials, workouts and races; there were something like 10-15 trainers in the Smaill’s Beach and Tomahawk area in the ’70s and ’80s.

"We celebrated whether we won or lost, and sometimes we started celebrating the day before so we wouldn’t miss out." 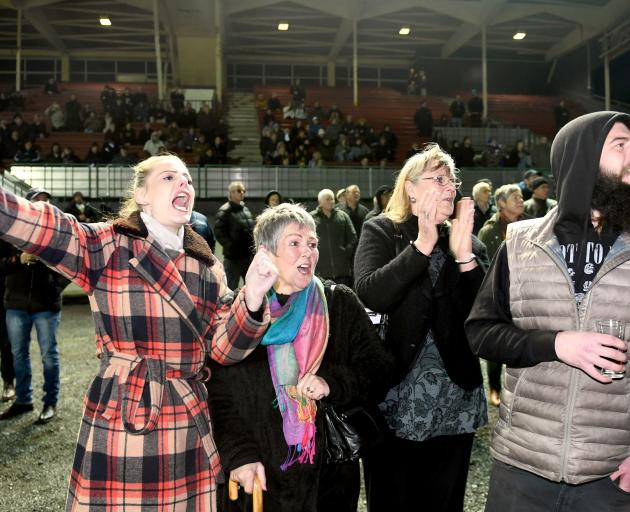 Georgina McCullough (left) urges on Livy Desma, a horse named after her aunt, in race 2 at Forbury Park. Sadly for her and Michelle McCann, Wendy Moore and Joel McCann, the horse only beat one home.
Club president Craig Paddon was thrilled so many people had come to farewell Forbury, but also wistful at the thought that if patronage had been that strong more often the club might not now be looking for a new racing venue.

"It’s a fabulous night, but it’s time to move on to fresh fields.

"This morning I looked outside at the weather and thought ‘oh no’ but it has held off and plenty of people have decided to come and say goodbye."

At 9.06pm, the mobile rolled for the final time at Forbury, and three minutes later the crowd cheered Dodgethebullet home to victory in the Tuapeka Harness Racing Club Pacers Cup.

Spare a thought for Hazer, though, the last horse home in the last harness race at Forbury. 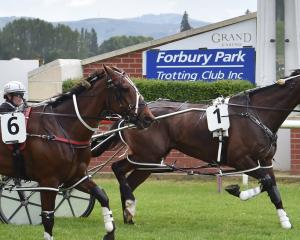