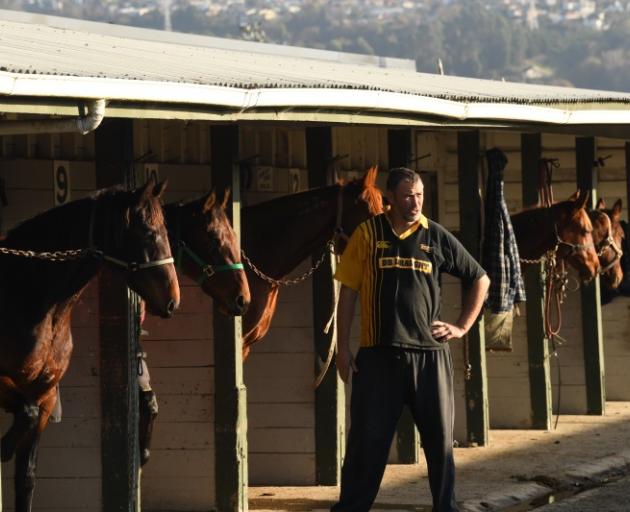 Uncertain future ... Harness trainer Darryn Simpson with his horses at Forbury Park this week. PHOTO: STEPHEN JAQUIERY
It has been a rough couple of months for harness trainers in the South — and the future is not looking too rosy, either.

Trainer Darryn Simpson first had to contend with the Covid-19 lockdown.

That meant no training for his horses as the Forbury Park track where he trained was closed to the public.

No training meant no income.

Halfway through that, the main part of the Forbury Park season, the winter circuit, was taken off the calendar as meetings headed south and north.

Now, as he comes back to train his horses, he finds Forbury Park has disappeared entirely from the draft racing calendar for next season.

‘‘It’s not been a great few weeks,’’ Simpson said.

‘‘You wonder what is going to happen next. But right now, things are pretty tough.

‘‘They talk about taking your horses to Invercargill. But it is not as simple as that. It’s a five-hour round trip, and that is not good for the horses. They’re on their feet all the time, stuck in a float, having to be balanced.

‘‘What am I supposed to do? Sell up and look at moving?

‘‘I’ve got family. My main owner doesn’t want to move. Then you’ve got staff to look after. It’s hardly going to be economical to travel down there four times a month.’’

Simpson said there were enough horses in the Otago region and he wondered how the counting of horses was done.

He said many things did not make sense in the calendar. Tracks had facilities for both codes but one code had lost all its dates.

It was hard to fathom how Forbury Park went from having 21 meetings to none in one year, Anderson said.

Dunedin trainer Eian Lamb said it was gut-wrenching to lose the meetings for next year.

‘‘It is just really, really poor, what they have done to us. They have punished the clubs.

‘‘They’ve given us the meetings on Thursday nights, which don’t attract a lot of betting. Then they turn round and say you don’t attract the betting. But that’s not our fault.’’

Submissions could be made on the calendar by the middle of June and the final decision made on July 3.