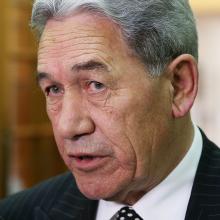 Peters was able to assemble the management board for the Racing Industry Transition Agency (RITA) yesterday - one day after the Racing Reform Bill passed its third reading in parliament on Thursday.

The passing of the Bill allowed the RITA board to initiate the drastic changes to the racing industry recommended by Australian racing expert John Messara.

Messara delivered a damning assessment of the industry in a review of the sector that recommended sweeping governance changes.

"This Bill is an important first step. However, while the race has begun, we are still far from the finish line," Peters said.

"The Racing Reform Bill lays out an opportunity to deliver real results, to grow this industry for the benefit of our regions, our communities, and our economy."

The Racing Reform Bill strips the management board of the New Zealand Racing Board organisation of its control of the industry.

It will also repeal the country's totalisator duty, establish an information charge for overseas bookmakers, and allow RITA to oversee the day to day operations of the TAB.

Peters has previously indicated the Racing Reform Bill would be the first of two pieces of legislation that would revolutionise racing.

The minister is expected to introduce the second Bill later this year after RITA begins work on restructuring the racing industry.

"As a whole, these reforms serve to emphasise the value of racing in New Zealand," Peters said.

Just hours after the passing of the Bill, Peters announced the make up of the RITA board.

There were few surprises when the members of the Ministerial Advisory Committee that Peters set up to advise the Government on how to enact the recommendations of the Messara report were appointed.

They will be joined by Anna Stove on the six-person panel.

"The appointed board members have a wealth of knowledge and experience in the racing industry, [and] sport at a national level," Peters said.

"I am confident that the unique skills and governance expertise the appointees bring with them to RITA, will enable them to excel in their roles, and in revitalising the racing industry."

Messara recommended the New Zealand Racing Board be disestablished and split into two organisations, Racing NZ and Wagering NZ.

Wagering NZ would handle the day to day business of the TAB and the country's sports and racing betting interests.

It is expected that the second racing Bill will allow Wagering NZ to be set up later up this year.

Concerns were raised in the submissions that no end date had been put on RITA's ability to control the racing industry in the initial writing of the Bill.

That has now been amended, and RITA is expected to be in place for one year before further change.

The removal of rates of returns from betting turnover to racing codes and sporting bodies was a hotly-debated topic in the house during the Racing Reform Bill's three readings.

The matter was the focus of a large number of submissions made on the Bill during the select committee focus.

Many of those concerns were raised by national sporting organisations or groups representing them.

The Bill was amended so that the Sports Minister would be consulted when rates of return were set for sporting codes.