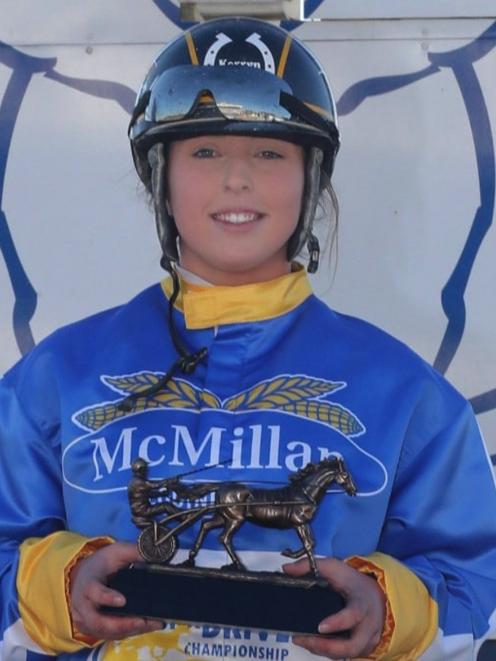 Several of the 12 competitors had a chance to get their hands on the trophy for the six-heat series going into the last race before Tomlinson (20) clinched victory with a second on Bright Glow.

The Canterbury-born driver said winning the championship rated right up with some of her biggest thrills in harness racing.

“Driving your own horse to win — Mordecai — was a big thrill and so was winning my first race because there was a bit of a build-up after it took a while.

Early in the competition, Tomlinson clinched a vital win with Aladdin Sane to put herself in series-winning contention.

It also helped give her bragging rights over her sister, Sheree, who finished just out of the top three placings.

“I saw a lot of the others were burning out of the gate early, so I stayed out of that.

“I was able to follow Sheree three-wide and then drop on to the back of the leader and outsprint him in the straight.”

That drive, arguably the best by any driver in the championship, involved her beating a trotter associated with one of the most important figures in her career right now.

“The Williamsons have been a huge help to me.

“I have only been working for Brad for a few months and they have already done so much for my career.

“When I drove my first treble down south they were all on drives the Williamsons helped me get.

“And during the series Matty helped a lot talking me through my drives and Brad has helped me a lot, too.”

The other most important figures in her career helped Tomlinson toast her win.

Celebrations were held at the property of her grandparents, Ken and Dianne Ford, from where several horses of her 30 career wins in the sulky have been prepared.

Tomlinson went into the series with confidence she could compete well with the horses she had drawn.

Bookmakers did not have the same faith in her, sending her out at $101 odds to win the title before heat 1 was run.

North Island rep Luke Whittaker was runner-up in the championship and Harrison, who pipped Tomlinson at the post to win the final heat, was third.

Tomlinson’s victory came just days after she produced a brilliant front-running steer behind Robyns Playboy, who bolted in by five lengths in the feature pace at Ascot Park on Friday.

Tomlinson might have some competition for the title of stable star at Brad Williamson’s barn when she returns to work today.

The trainer’s classy 3yr-old trotter Cracker Hill was sensational in winning at Addington on Friday night.

After leading, he reeled off a sizzling 27.1sec last 400m to leave his rivals in his wake.