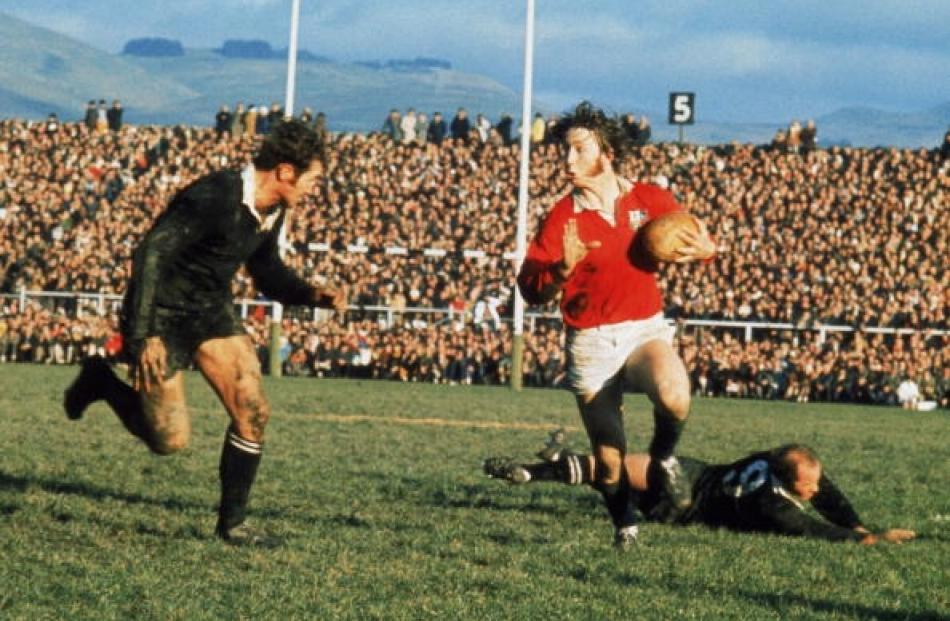 Lions fullback JPR Williams takes on All Black flanker Ian Kirkpatrick during a test on the tour to New Zealand in 1971. That tour was the first time the Lions beat the All Blacks in a test series. Photo from Getty Images. 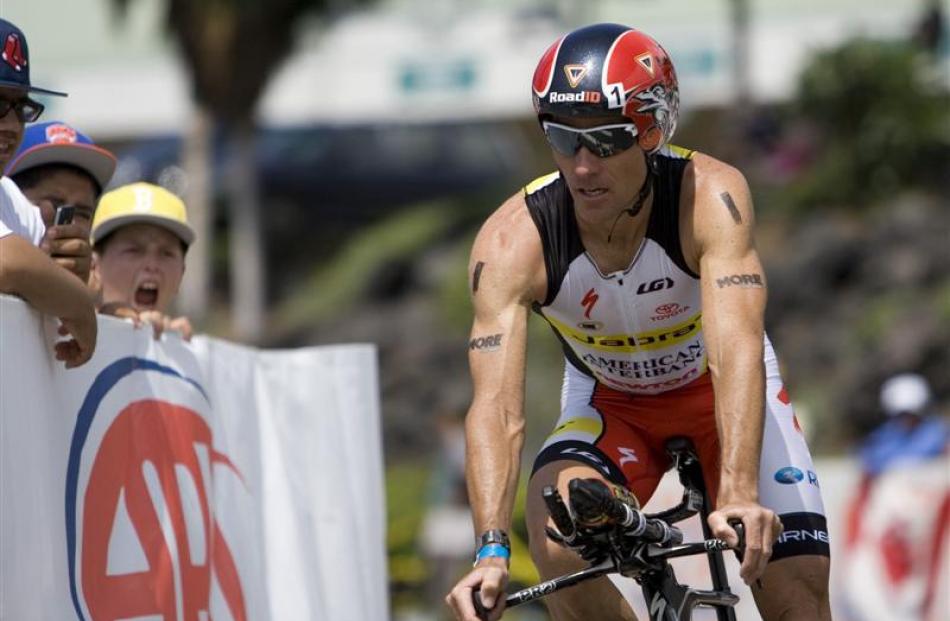 ODT subeditor Tony Love has been obsessed by sport for more than 40 years. However, the all-consuming passion of youth has dulled and, as he gets older, it is the aspects of sport that bug him that occupy more and more of his thoughts.

In many ways, being a sports fan has defined, and still defines, my life. I'll never forget lying in bed as a 10-year-old listening to the transistor as the All Blacks - despite the best efforts of a rampaging young Bryan Williams - lost 20-17 in the fourth test against the Springboks at Ellis Park in 1970 to lose the series 3-1. Or listening the following year as the mighty 1971 Lions beat the All Blacks in a test series for the first time.

Even though we lost the series, I took consolation in the fact that my hero, Ian Kirkpatrick, scored one of the great All Black tries in the home side's win in the second test at Lancaster Park. And, of course, every kid wanted to place kick around the corner a la the Lions' incomparable No 10 Barry John. Even today I can picture some of the greats in the team as if it were yesterday - John, Gareth Edwards, Mike Gibson, John Dawes, David Duckham, Gareth Davis, John Bevan and JPR Williams.

And they had some pretty good forwards too!There were also some talented players in the All Black team but, for some reason, it's the players who were never really seen again such as Howard Joseph (two tests), Mick Duncan and Phil Gard (both one test) whose names have stuck with me.

Despite the All Blacks' loss, I bought an LP (sorry kids, long-playing record) of that series (yes, they used to produce such things in those days) although from memory I think I mainly just used to listen to Kirky's great try.

The following year was notable for the first television broadcast of the All Blacks playing in a test overseas. I watched the opening test of the tour - against Wales - with my uncle, who still tells the story of how I left the room unable to watch as Wales was awarded a penalty late in the game with the All Blacks leading 19-16, leaving the home side with a chance to tie the scores. Welsh flyhalf Phil Bennett missed the kick and I was able to return to the living room to celebrate our win.

In the following days, the win was overshadowed as All Black prop Keith Murdoch - who, incidentally, scored his side's only try - was sent home for an incident involving a hotel security guard. All our other points were scored by fullback Joe Karam, much more famous now for his crusade on behalf of David Bain. I'd already gone off Karam after he switched to league in 1976.

Anyway, when you're hooked at such an early age you stay hooked. Maybe not with quite the same intensity as you feel as a kid but the off-the-scale lowlights - the All Blacks' shock loss to France in the World Cup quarterfinal in Cardiff in 2007 springs to mind - and highlights - their redemption four years later, will always stand out.

I remember my phone ringing off the hook on that nightmarish Sunday morning in 2007 and simply ignoring it. Perhaps it was just a bad dream. Then my mobile went and it was my good friend and then ODT rugby writer (now sports editor) Hayden Meikle who'd just witnessed live the train wreck in Cardiff. I answered the phone and we tried to tell each other the world wasn't over.

It must be difficult being male and not being a sports fan.

How on earth do you make small talk when you meet a fellow male for the first time? Perhaps this just means I'm shallow, but I really can't

think of a good male friend who doesn't get sport. For some reason with women, it doesn't seem to matter. I'm not sure what that says about me.

Having said all this, I've been beginning to doubt recently whether I really am a sports fan. Oh no doubt that I'm a rugby, boxing, horse racing and cricket fan. I follow golf and tennis - especially the majors - and I've read much about the history of baseball.

And when the Olympics roll around, I get a real buzz from seeing Kiwis shining on the highest stage. Athletics and swimming aren't my favourite sports but I can't understand anyone who isn't blown away by the likes of Usain Bolt or Michael Phelps . I have a passing interest in football, of course, especially my beloved Celtic, although I'm by no means a true fan.

I was addicted to the Tour of France when Lance was winning it but now am so over it.

I can watch the Kiwis or Warriors but usually give up when they start losing. Having said that I did cry like a baby when we beat the Kangaroos to win the World Cup in Brisbane in 2008.

I always take the day off to watch the Super Bowl and really get into it - probably the beers (American, of course) I drink help - but I really don't pay much attention to the NFL the rest of the season.

Still, there are far more sports I merely tolerate or actively dislike. I hate synchronised swimming, gymnastics, wrestling, ice hockey and martial arts but then, who doesn't? Basketball may well be the second-most popular sport on the planet but I simply don't get it. Why do the final five minutes last an eternity?I have to confess I saw the last five minutes of the final when the Silver Ferns won their world netball title in 2003 in Kingston (the queens of Kingston) but it truly is an unwatchable sport. Besides, there are really only two countries in the world which play it and we're usually second!Don't get me started on motorsport.

I know it has a huge following but it's usually by people who don't follow other sports. The term motorsport always reminds me of North Korea or, to give the country its official name, the Democratic People's Republic of Korea. If a country has to have ''Democratic'' in its name then you can bet your bottom dollar it isn't. If a so-called ''sport'' has to include that term in its name ... Well, you can see where I'm going with that.

One sport which I hate with unbridled enthusiasm is triathlon. I'm afraid my definition of a triathlete is someone who can't swim, can't run, can't cycle (a bit like Chris Harris was an all-rounder because he could neither bat nor bowl). That is an original of mine although maybe it was inspired by English middle-distance great Steve Ovett's description of the decathlon as ''nine Mickey Mouse events followed by a slow 1500m''.

But my real venom when it comes to sport is more about the terms used or, should I say, often misused. I'm not saying in every instance that I'm right and everyone else is wrong, just that certain things really, really bug me.

There is one fad, fashion, affectation - call it what you will, that really drives me crazy. Why do we no longer play cricket (or rugby, for that matter) tests? Instead, we now play test matches. I mean, what is the difference? Test match this, test match cricket that!It's a test; it's test cricket.

If you don't believe me, then simply pay attention next time you're watching or listening to a commentary of a test.

OK, not really a biggie compared to what's happening in Syria but I never said this article was about balance or rationality.

On a related note, I can't understand why some people feel compelled to write test as Test. It's just a nonsense. Hopefully, my colleagues and I catch those instances when editing the offending stories so you don't have to see them appearing in the ODT.

I was at Carisbrook in 2005 when the All Blacks edged the Springboks 31-27 in a real thriller. It was the first time the All Blacks performed the Kapa o Pango haka.

But, call me sad if you like, the one thing about that test (not test match) that really sticks in my mind is not the All Blacks' late come-from-behind win or that spine-tingling haka (and I can usually give or take the haka) but the centrespread of the programme in which the teams were listed.

Two great teams - let's face it, to anyone of my generation the Springboks, rather than the Wallabies - remain the ultimate foe. Hell, we didn't beat them in a series until 1956 (there's an old joke I remember reading many moons ago: What's the greatest team to leave New Zealand? Answer: the 1937 Springboks). We didn't win a series over there until 1996.

Until South Africa's reintegration into the sporting world in 1992, the Springboks had the wood over the All Blacks. The teams first played in 1921, so for 71 years of our 91-year rivalry they had bragging rights.

To digress - again - a former Irish girlfriend of mine took real offence at the term British Isles. I tried to explain that it was a purely geographical term rather than a political one (as in Irish Sea with which she didn't have any problem) but she just didn't get it. The term British and Irish Lions was coined as a marketing ploy and, while rather clumsy, I can't argue with it - much as I prefer the simpler moniker the Lions.

Another recent development -and I'm not saying it's wrong, just that I hate it - is to use the term All Blacks captain Richie McCaw or All Blacks greats Justin Marshall and Andrew Mehrtens.

Staying with our national sport, there are no rules in rugby. But there are laws and, God knows, a plethora of them. That's why a few years ago we had experimental law variations, not experimental rule variations.

And then there's the golf tournament played annually at the Augusta National Golf Club, a tournament instituted by the great Bobby Jones on a course he helped design. The name of the event is so NOT the US Masters. It is the Masters. I have to take a deep breath even writing this. Mind you, I must confess to being a bit hypocritical here because I have no problem with the term the British Open when the official name is The Open Championship or The Open.

On that note, it's time to end. I've just proved to myself, if not to you, that there's no rhyme nor reason to any of this. But I know I'm not the only one who gets all bitter and twisted by things equally as trivial as I've outlined as they watch the telly, listen to the wireless or read the newspaper.