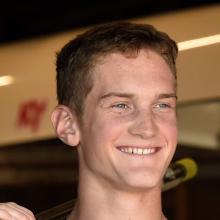 Ben Mason and Bradley Leydon were part of a silver medal-winning crew at Lake Karapiro yesterday.

Mason and Leydon joined Canterbury duo Nathan Luff and Zackary Rumble to finish second in the under-22 men’s quadruple sculls.

Dunstan Arm added plenty of crews to its already impressive list of A finalists.

In the senior grade, Simon Smith, who is also the club’s coach, will race for two medals.

He finished fourth in the single sculls semifinal to advance, and paired with Greg McLaughlin to finish third in the semifinal of the double.

Kirsty Mahoney also advanced to the single sculls final in the intermediate grade and paired with Daendie de Beer to make the double final.