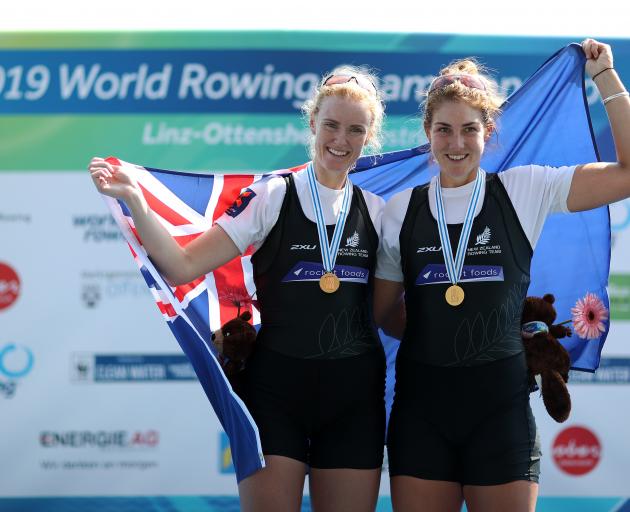 Grace Prendergast and Kerri Gowler with their gold medals for winning the women's pair. Photo: Getty Images
Two golds and a silver for New Zealand crews on the second day of finals at the World Rowing Championships in Austria.

Grace Prendergast and Kerri Gowler have won the women's pair for the second time in three years, while Zoe McBride and Jackie Kiddle have completed an unbeaten campaign in the women's lightweight double.

Thomas Murray and Michael Brake have also snatched silver in the men's pair.

Prendergast and Gowler were the first Kiwi crew on the podium, after beating Australia by two seconds.

"We worked really hard for this," Prendergast said.

"I think that was the closest race I've ever been in which made it even more special.

"I think it came down to sticking to our race plan and trusting ourselves."

"We knew it was going to be a really close one going into it, but we knew we just had to trust our race and back ourselves in that last 500," Gowler added.

McBride and Kiddle then claimed New Zealand's second world title and their first as a combination, after finishing second in 2017 and sixth last year.

They crossed the line four seconds ahead of the Netherlands, with Great Britain snatching bronze ahead of Romania.

"This is surreal. We've been waiting a long time for this, I am absolutely stoked," Kiddle said.

Murray and Brake also made a big jump from last year's sixth place finish to claim silver in the men's pair.

They finished a clear second, three seconds behind the winning crew from Croatia and six seconds clear of Australia.

New Zealand crews will line-up in a further four finals tonight, with Prendergast and Gowler back in action in the women's eight.

Gowler feels their bodies are holding up well.

"There's a lot more time over a world champs week as opposed to a world cup regatta which is only three days so I think we've managed it really well and definitely fit enough to be able to do it," she said.

"We just want to go out there and really show what we've done and just go as fast as we can and hopefully that'll put us on the top step."

The result will likely dictate whether the pair will attempt to row in two events at next year's Tokyo Olympics.

"There hasn't really been any thought past this week yet. I guess we see how tomorrow goes and we'll reassess over the summer," Gowler said.