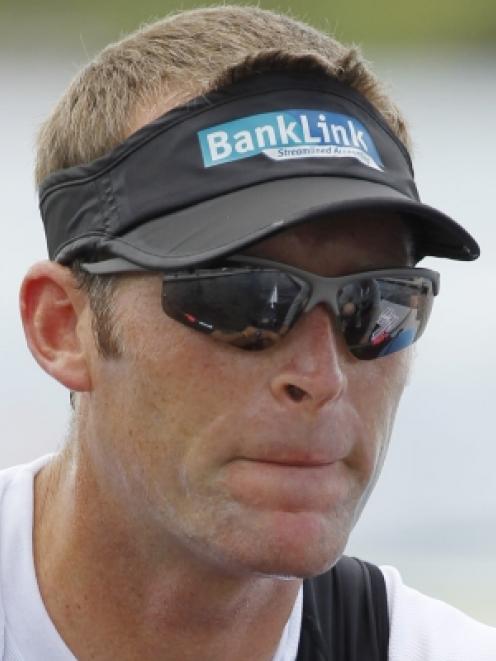 After watching rival and defending champion Mahe Drysdale's tribulations at the start of yesterday's first semifinal, which began with a yellow card due to the absence of mandatory stickers on his boat and ended with a race restart due to technical problems,

Campbell turned up well prepared to a pre-finals press conference this afternoon.

"Just in case, we've chipped together to get him some stickers, to make sure he's got them," Campbell announced, presenting Drysdale with a complete set of stickers.

"We don't want any mess-ups in the final."

Drysdale had arrived at the race start without country and world rowing stickers on his boat, and the race was delayed while officials fixed the stickers to his shell.

But because they weren't fixed above the water line, and were dragging the boat, Drysdale called a halt to race inside the 100m breakage zone.

The race was halted, and the international umpire checked the New Zealander's equipment before deciding to restart the race with all crews.

Drysdale went on to record a solid win over in-form Czech Ondrej Synek, making every split a winning one in recording seven minutes, 12.74 seconds, 2.34sec ahead of Synek

Campbell, who said he was on edge waiting for his semifinal to start following Drysdale's race, perversely had his nerves eased by the fiasco unfolding in front of him.

"I was quite going up to my semi, but when I saw what was going on in front of me, I thought `I've got no reason to be nervous' , because I'd be absolutely having a heart attack if I was in Mahe's position."

The Briton went on to win his heat from Norwegian Olaf Tufte to secure his spot in the final.

Campbell said he had no problem with how the situation was dealt with.

"It was unfortunate that it happened but it's been dealt with, it's behind us, we're here to race the final now. Personally, I think the right people got through."

Drysdale took the presentation in good part, underlining the camaraderie within the discipline.

"We're friends off the water and enemies on it: as soon as we get into the blocks and that race situation, it's every man for himself," Drysdale said.

"After the race, you come out and enjoy and beer with each other. It's not that hard, I think in some ways it's even easier to beat your friend than beating a stranger, because then you can brag about it later."

Campbell said the final, scheduled for tomorrow aftenoon, was shaping up as a ripper.