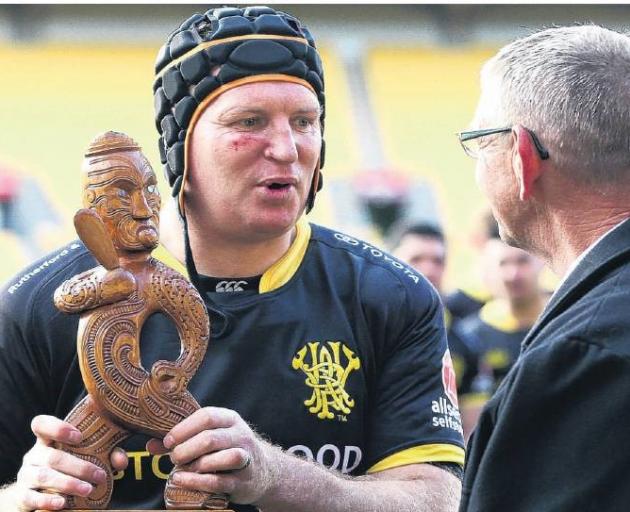 Wellington captain Thomas Waldrom accepts the Mike Gibson MemorialTrophy from Guy Gibson after beating Otago in Wellington in 2018. PHOTO: GETTY IMAGES
Mike Gibson, from Maketu in the Bay of Plenty - good bloke, top rugby player and a bit of a free spirit.

In fact every year, a group of family and friends get together and venture to watch a game of rugby which they all have a connection with, no matter how small.

The Mike Gibson Memorial Trophy is played out every year Otago takes on Wellington. Otago won it back last Saturday when it beat Wellington 35-34 in a match which had a thrilling conclusion. 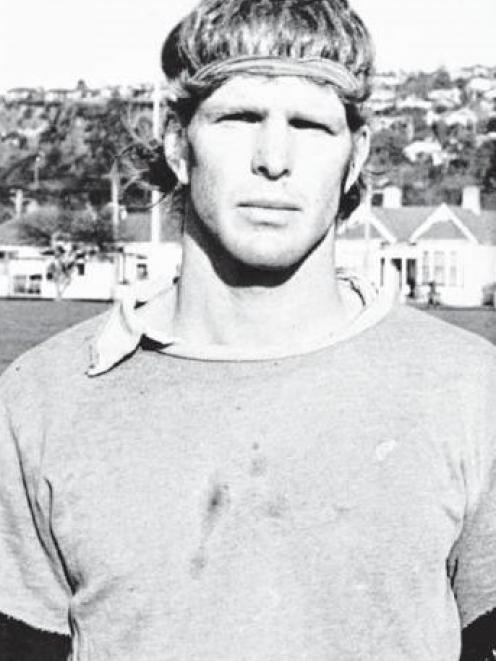 Gibson at an Otago training at Bathgate Park in the mid-1980s. PHOTO: ODT FILES
Gibson played for both Otago and Wellington, but his life was cut tragically short.

Shortly after his death, the Gibson family approached both unions to see if they would play for a trophy in his name. They agreed and ever since 1989 the trophy has been fought between the two teams.

Many trophies just fall by the wayside, or get forgotten in the modern world. Not the Mike Gibson Memorial Trophy though. The Gibson family make sure of that. His older brother Rick said there was still plenty of honour in the trophy.

‘‘There would be a core of us - about 12 of us - who try to go to every game. When the game is played in Wellington we might get up to 40 family and friends coming along to the game,’’ he said.

‘‘It is a good way to keep in touch with one another and also remember Mike. What he meant for us and the passion he had for life.’’

The Gibson family talk to both teams about the trophy before the game and was lucky enough to be in the Otago changing room last week after the victory.

Mike Gibson, the sixth of eight children, was born in Masterton but moved to the Bay of Plenty before he went to school. His father Ian was the principal of the Maketu Primary School, and also had his hand in seemingly every other organisation in the small town.

Rick said his younger brother loved life and everything about it.

‘‘He loved to surf, loved to play sport, was a good artist. He was passionate about everything he did.’’

Mike attended Te Puke High School and was set to attend arts school, but switched and went to Otago to study for a physical education degree.

He started out playing for University and in 1984 made his debut for Otago, with his long hair flowing. His second game was against the touring French, a game Otago lost 20-10.

The next year, Gibson was more of a fixture and played in the side which upset Auckland 12-10, a week after the Aucklanders had won the Ranfurly Shield.

John Latta propped the scrum for Otago in those days, and described Gibson as a free spirit.

‘‘He was a free-wheeling sort of guy. Just really laid back. He looked like Tarzan and I remember the backs had a move called Greystoke,’’ Latta said.

‘‘But he loved his rugby and we were coached by Laurie Mains so he had to train hard. Laurie didn’t suffer fools.’’

In 1986 in his last yearof studies, Gibson was picked to play for the South Island in Oamaru but had to withdraw because of injury. He ended his Otago career that year having played 26 games. He and partner Natalie moved to Wellington.

He started working with tennis player Belinda Cordwell on her fitness.

In 1988, he played in the early South Pacific Championship games for Wellington, but at a practice before amatch against Manawatu he picked up a cut and it would not stop bleeding.

He struggled in the match and when he came off the field his legs were all black and blue. He went to a doctor in Palmerston North straight after the game and then was taken to hospital.

It was there that he was diagnosed with leukaemia. It was a shock but Gibson - ever the fighter - then went through a bone marrow transplant with his younger sister Pip and for a time he was in remission.

But in January, 1989, he went for a check-up and was told his condition had got worse and he had three weeks to live.

He went to Sydney to meet up with Rick, who was living in Perth, for a few days. On the way back to Rotorua in Wellington he collapsed in the shower in a hotel and died of a brain haemorrhage.

The family then thought about away to honour Mike and the trophy came about. Ian Gibson knew Winata Tapsell who carved a trophy which reflected

Mike’s life - his connection with the surf, his home in Bay of Plenty, his time in Dunedin. The unions quickly agreed to play for the trophy.
It was first played for in 1989 - when Wellington won - and had been contested ever since. Thanks to a good spell in the 1990s, Otago has held the trophy more than Wellington.

Rick Gibson, who is now based in Invercargill, says he will be there next year in Dunedin if the two teams play each other.

‘‘The good thing about it is it keeps us all together as a group. We get to see each other every year and we never forget Mike. Even when he was really sick he still had the amazing passion for life.’’