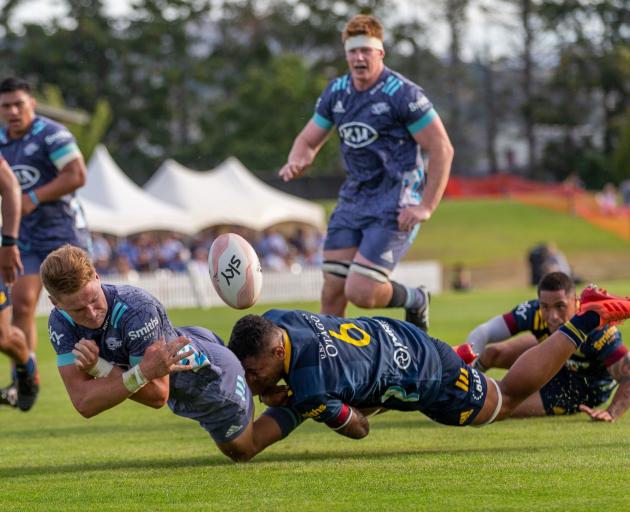 Hurricanes lock Jordie Barrett is caught in the tackle by Shannon Frizell of the Highlanders in a preseason game in Alexandra last Friday night. Barrett shapes as a key man for the Hurricanes in this year’s Super Rugby Aotearoa competition which opens tomorrow. PHOTO: GETTY IMAGES
The Crusaders will again start as favourites for Super Rugby Aotearoa which starts tomorrow, while the Hurricanes have plenty of muscle but may be weak in a couple of areas. Rugby writer Steve Hepburn has a look at the chances of the two teams.

The success and failure of the Hurricanes will come down to one thing — how much will they be hurt by the loss of both Beauden Barrett and TJ Perenara.

They have been the backbone of the side for many years and though Barrett left last year, it is the absence of Perenara for this season which could hurt the side even more.

Say what you want about him when he wears the black jersey but Perenara is an absolute star in Super Rugby.

He has scored 55 tries in Super Rugby. Every other player who has scored 50 or more tries in the competition is an outside back.

Perenara is a great support player in Super Rugby, makes tackles and helps his team get on the front foot. It is hard to think of any games where he has been outplayed at this level.

Then throw in the unavailability of Jamie Booth with a broken leg and the Hurricanes have questions around the inside backs.

Luke Campbell, Jonathan Taumateine and Cam Roigard will have to carry out the halfback duties.

Jackson Garden-Bachop appears to be the first choice in the No10 jersey.

The bodies are big in the backs with Julian Savea back in familiar colours, while Ngani Laumape was on fire for the side before he injured his wrist last year.

Jordie Barrett is a legitimate match-winner now at this level after being over-hyped when younger.

The forwards are solid and there appears no weak link. Dane Coles has been battling injury but Asafo Aumua is in the wings and ready to get some good minutes.

Locks are solid and there is plenty to like about the loose forwards, with Ardie Savea ready to lead the side.

Why they’ll win it: Firepower all over the place, Jordie Barrett ready to take the next step.

Why they’ll not win it: Playmakers may not be up to it, inconsistent players through the side.

Southern connection: Former Highlander Gareth Evans is back again for the Hurricanes but is facing some intense competition to get into the starting side.

This is not the easiest thing to say but it is hard to see any other side taking away the Super Rugby Aotearoa trophy from the Crusaders this season.

The side from red and black land ticks plenty of boxes. It has a top-rate tight five which is strong in the set piece. Cullen Grace looked a real find in the early days of last year.

Bryn Hall is a good halfback while in Richie Mo’unga, the Crusaders have probably the best player in the competition. He seems to always take the right option. Mo’unga is the sort of player every other team would want and has developed nicely at this level.

Outside Mo’unga there is plenty of talent. Leicester Fainga’anuku is looking to move into the midfield, where he may partner Jack Goodhue.

Will Jordan was the player of the season last year and everything he touched seemed to turn to gold.

The Crusaders have won the trophy that matters four years in a row and are short-priced favourites.

The only worry could be injury and a lack of depth. Canterbury was nearly relegated from the national provincial championship and many of those players are the bench players for the Crusaders.

If too many of them have to step into the breach, the pressure could go on the Crusaders and they may struggle.

Why they’ll win it: Top players all over the paddock, strong set piece.

Why they’ll not win it: Not a lot of depth in some areas; loose forwards could be better.

Southern connection: Josh McKay is gone from the Highlanders after three seasons and has come into the Crusaders to cover for Braydon Ennor. McKay may soar or struggle. For the Highlanders he simply made too many mistakes.