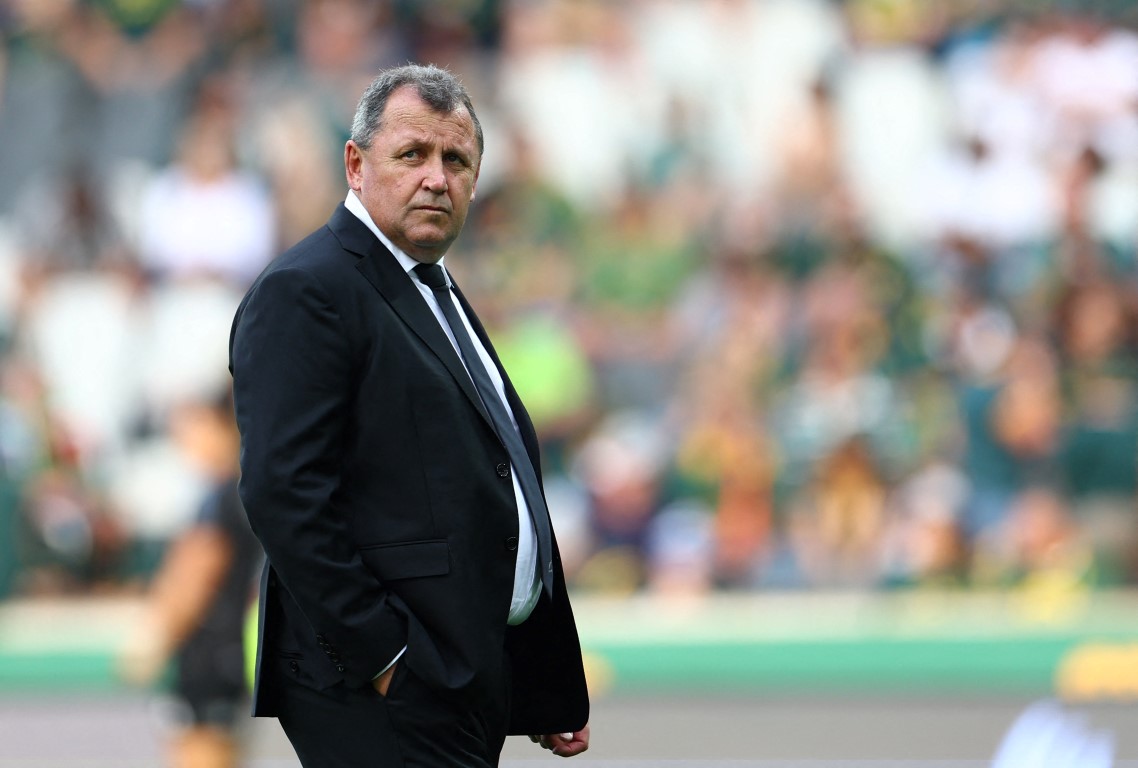 All Blacks head coach Ian Foster. Photo: Reuters
In a one-sided defeat to the Springboks where their attack failed display any form of fluency, they were dominated at the breakdown and struggled to defuse the aerial bombardment, All Blacks coach Ian Foster believes his side delivered their most-improved performance of the season.

A fifth loss from their last six tests revealed familiar issues for the beaten and bullied All Blacks to heap further pressure on Foster's troubled tenure.

Despite losing 26-10 at Mbombela Stadium, a result in which the margin flattered the All Blacks, Foster clutched for positives in the form of new forwards coach Jason Ryan improving their maul defence.

In a post-match interview on the pitch, Foster went on to claim the All Blacks had stepped up following the first home series defeat in 27 years against Ireland last month.

"We're bitterly disappointed but I felt it was our most-improved performance this year," Foster said.

"Some of the areas we really shifted our game forward. In a game dominated by defence we defended well but our timing was out a little bit in terms of the attack so we're going to have to go and have a look at that. There's a few players over here for the first time feeling the pressure that comes from this type of team. We're pretty excited about the next challenge of playing at Ellis Park for a trophy."

Foster, it is widely believed, must now lead a dramatic transformation next week to save his job. Addressing the many deep-seated issues in such a short timeframe appears impossible. Yet the embattled head coach projected confidence the All Blacks can achieve an upset at the home of South African rugby.

"Quite easily really," Foster said when asked how he would get the team up.

"We came over here for a two-game series and we always knew it was going to be tough. We felt that tonight. They get the lollies and they thoroughly deserve that. We've got to take some things that we've made big shifts in. We nullified a large part of their driving game.

"We made some shifts defensively and in the last quarter we were starting to open things up. We started to snatch at a couple of balls, which is frustrating, but we've got to take that experience and take it into Ellis Park, walk in there and give it a crack." 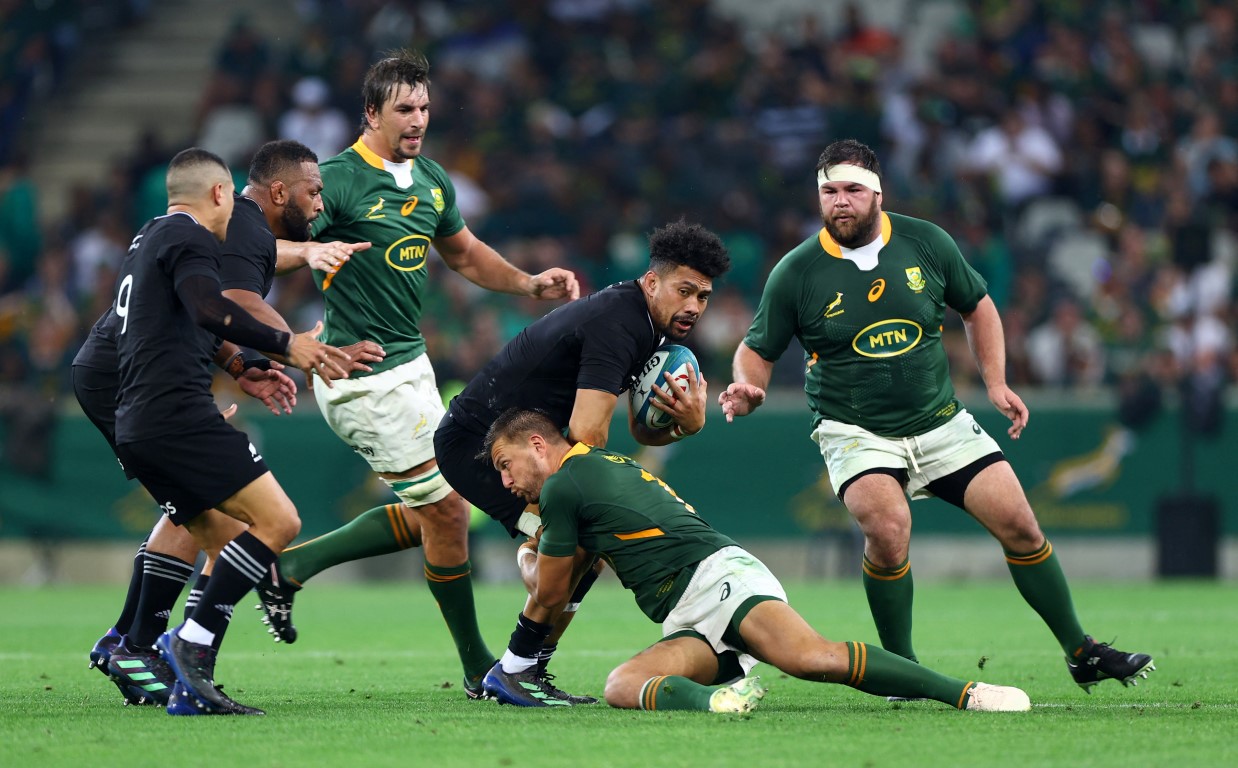 New Zealand's Ardie Savea is caught by the South African defence, Photo: Reuters
Springboks hooker Malcolm Marx celebrated his 50th test by having a field day with the All Blacks; breakdown. This area contributed to the All Blacks' attacking struggles, with captain Sam Cane admitting the support often didn't arrive quickly enough.

"That was one of the keys to the test match – our inability to get enough momentum going. Malcom Marx in particular getting over the ball," Cane said.

"Normally it comes down to the ball-carrier winning the collision and snapping back but particularly the cleaners were half a second off and he was winning that race. Once he gets in a strong position over the ball he's probably one of the toughest in the world to move."

Foster conceded mounting speculation around his future was difficult to escape and, on a personal level, taking its toll. Widespread calls for further change – after assistant coaches John Plumtree and Brad Mooar were jettisoned following the Ireland series – will now only intensify.

"I'm going grey and my hair is receding pretty quickly. It's never easy. The standards we've got internally mean you want to do well but we've got a group that's still developing. I've been over here for a number of years with more established All Blacks teams than what we've got now. This one is still growing. It's not where we want it to be but I still believe it can get there."

The All Blacks managed one late try to Shannon Frizell after a brilliant Caleb Clarke break but, otherwise, they never looked like scoring. Ongoing attacking issues, combined with the breakdown failings, scrum frustrations and a horror run of form leave the All Blacks seemingly in a tailspin towards their nadir.

"It's not a matter of shutting it out it's there all the time," Foster said of his future.

"If you spend too much time immersed in it, it doesn't do the team any good. We know we've had a couple of losses. We understand that but, in all honesty, I thought we shifted up a couple of cogs in this test. Some of the areas we wanted to focus on we made some significant improvement but didn't quite get the other ones right.

"We're coming off a lost series and there's a lot of noise around this team now. When a team is working hard to get its game at a level it wants sometimes you get a little bit overeager. I thought there was a little bit of that today – almost wanting it too much and trying a little bit too hard.

"It's one thing to say you want to get everything right and be perfect but it seldom happens. This team right now I know we're developing and growing. I know people are frustrated with that, and we're frustrated with results. But you don't achieve growth if you get too panicky and start making dramatic changes and putting too much pressure on players."

Cane leapt to Foster's defence by insisting the team remained behind him and suggesting that, despite the string of defeats, they were not as far away as everyone believes.

"One thing you may not see from the outside but you can certainly feel within the camp is the belief is really strong. Even with five minutes to go when there was the red card there was genuine belief," Cane said.

"It's only something you can feel – and you can feel it when it's not there. The group's belief in themselves and what we're trying to achieve is high and when you've got that and an attitude to work hard it's a good recipe so we've got to stick at it and it'll turn. If we didn't have those things in place I'd be pretty worried but the right ingredients are there."

By Liam Napier in South Africa