McKenzie to miss out on World Cup 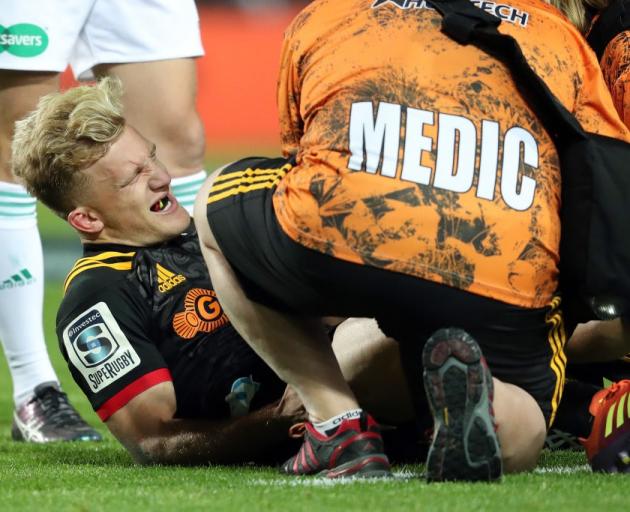 Damian McKenzie suffered the injury early in the second half against the Blues. Photo: Getty Images
All Blacks star Damian McKenzie will miss the Rugby World Cup.

Coach Steve Hansen announced today that McKenzie injured a major ligament in his right knee on Saturday night, and as a result, is likely to be out of contention for rugby's pinnacle event in September.

A ruptured ACL (anterior cruciate ligament) usually requires anywhere between six to nine months on the sideline, meaning McKenzie (23) would need a miracle recovery if he was to be any chance of being on the All Blacks' plane to Japan.

'He's done an ACL and looks to be out for eight to nine months which is a real shame for him," Hansen said.

"His World Cup opportunity's gone but he's still young enough to make probably the next two. It's just important he gets his knee right and takes the time to be able to come back and achieve the dreams that he wants to achieve.

"It's sad for him obviously. It creates another opportunity for someone else. We've got to expect injuries and there will be more than just him I'd say."

The Chiefs fullback limped from the Waikato Stadium pitch on Saturday night in his side's win over the Blues. He suffered the injury early in the second half when attempting a tackle on first-five Otere Black, and looked to be favouring his right knee when hobbling off.

He walked from the field with the help of a Chiefs medic but appeared in pain, and went on to have an MRI scan to determine the extent of the injury.

The news is a blow for the All Blacks, with McKenzie having developed into a fine utility player for Hansen's side, capable of covering at fullback and first-five eighth, and often providing a serious spark and X-Factor when brought off the bench.

McKenzie is originally from Invercargill and went to school in Christchurch.

He was picked as one of the 41 players to attend today's All Blacks foundation day in Wellington, and was highly likely to be one of the three first-fives selected for the World Cup, along with Beauden Barrett and Richie Mo'unga.

Now, it looks as if the All Blacks selectors will have to change their plans.

The Rugby World will be held from September 20 to November 2.