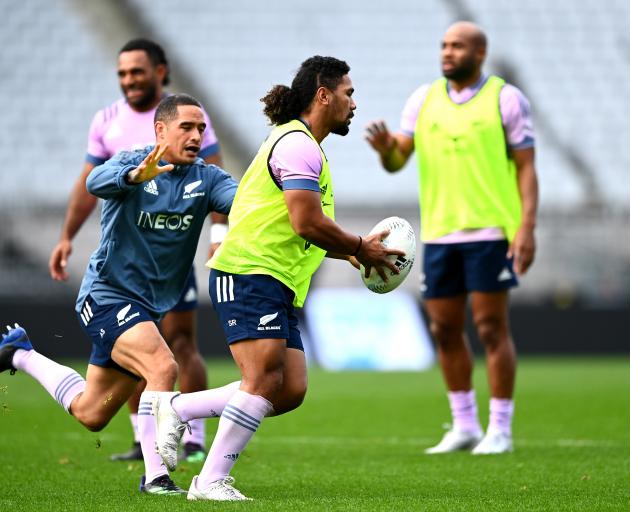 Aaron Smith and Folau Fakatava train ahead of tomorrow's clash against Ireland. Photo: Getty Images
The unofficial battle for world rugby supremacy begins tomorrow night. Jeff Cheshire asks some key questions ahead of the All Blacks’ series against Ireland.

How is each team tracking?

It has been hard to get a read on international rugby lately — Covid-19 has played such a big part. How much of the All Blacks’ loss to Ireland last year was a product of being on the road for so long? That does not detract from Ireland’s win, but it is potentially not the best indicator for picking future results. Ireland has won three of its past five tests against the All Blacks and has largely stifled the attack. However, those wins have all come north of the equator. Winning in New Zealand remains the final frontier. If the Irish can achieve that — particularly if they can win the series — this Irish team can be seen as very much the real deal.

Can the All Blacks tighten up?

The All Blacks can cut an opponent to shreds. In an open game, they have all the flair and strike power to run up 50 points on anyone. When the game tightens up, though, they struggle. You can say they should break the game open. But sometimes a good team won’t let you do that. That is where you have to roll your sleeves up and get stuck in. This team is yet to show its ability to do that. The great All Blacks teams have been able to do both. Richie McCaw’s All Blacks teams could run all over opponents, but the likes of McCaw, Jerome Kaino and Conrad Smith were able to adapt and thrive in a closer game.

What is the top midfield?

Nonu-Smith, Little-Bunce, Osborne-Robertson. There have been some great midfield duos throughout All Blacks history. The current duo is not at that level — and what is even the best combination? Anton Lienert-Brown is an automatic selection when he is back. For the next three tests, though, there is a lot to ponder. Rieko Ioane looks to be the go at centre, but he still looks like a winger playing in the midfield. Does Roger Tuivasa-Sheck eventually get a chance at 12? David Havili fell off last year, Quinn Tupaea is OK and Jack Goodhue has barely played since the last World Cup.

Let’s be honest, it is not just the midfield that is up for grabs. The Barrett-Mo’unga debate rages on at 10. The make-up of the loose forward trio remains anyone’s guess. The lack of depth at hooker is a major concern and the best prop in the country — without Joe Moody — is not even in the squad. Is there still life in Retallick and Whitelock? And — perhaps this might be sacrilege to say down this way — is it time to move past Aaron Smith at halfback?