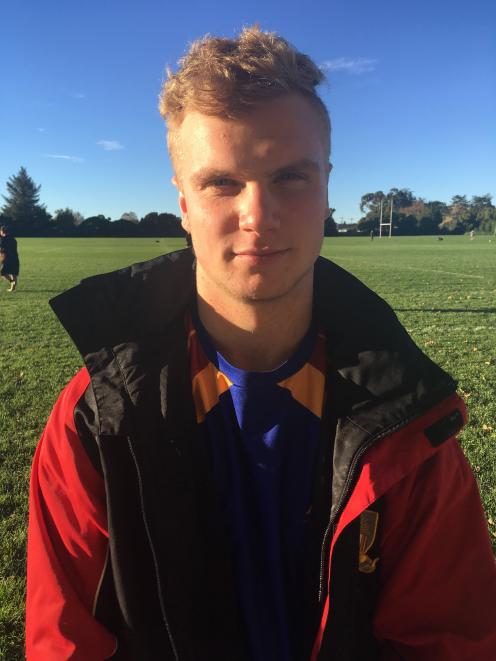 Bryden Skinner
Maheno remains top of the pile after the latest round of Citizens Shield games in North Otago on Saturday.

Maheno beat Old Boys 38-33 while Valley beat Athletic 38-19. In the other match, Excelsior defaulted to Kurow.

Athletic Marist has five points and Excelsior has one.

There was a big crowd at Maheno Domain on Saturday after the two sides had played a thriller the previous week.

Maheno’s pace out wide once again put pressure on Old Boys as winger Bryden Skinner crossed in the 10th minute for Robbie Smith to convert.

Old Boys dominated the middle stages of the first half as first five-eighth Mataitini Feke scored two tries, both converted by Lemi Masoe.

Six minutes from halftime Maheno flanker Jacob Day touched down and Smith levelled with his conversion.

A minute from halftime, Maheno speedster Adam Johnson went in for an unconverted try to give Maheno a 19-14 halftime lead.

Straight away in the second half, Maheno used its pace out wide and Johnson and Skinner added further tries to give Maheno a 33-14 lead.

Smith added a penalty to extend the lead before Old Boys hit back with three late tries to Kulueti Lolohea and two to flanker Toni Taufa with a couple of Masoe conversions taking Old Boysfive points short on the final whistle.

Athletic Marist played with plenty of courage against the favoured Valley which pulled away in the final 40 minutes for a 38-19 win.

The powerful Valley forward pack took a grip on the second half as Sturgess mader a second try, Paton’s conversion extending the lead to 19-7.