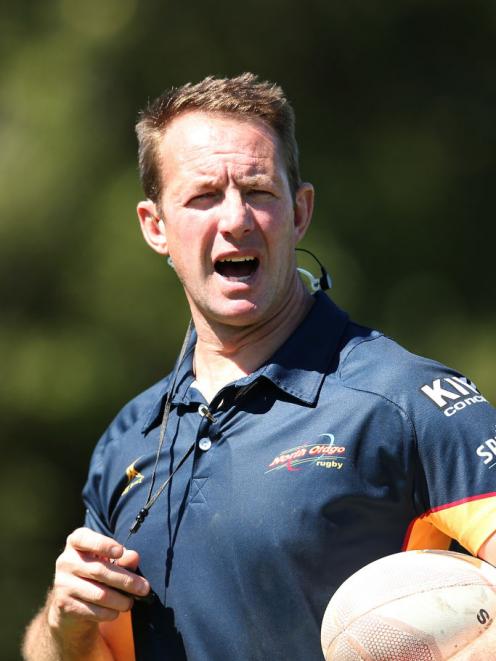 Jason Forrest barks out some orders in the warm-up to the Heartland Championship semifinal in Oamaru last Saturday. Photo: Getty Images
North Otago has a proud record over the past two decades.

Every year since 2000, the side has made the playoffs. Seen post-season action.

But it has not been so rosy of late. It may have been in the playoffs but it has been in the Lochore Cup, which is for teams placed fifth to eighth. The Meads Cup - for the top four sides - has been beyond the side since 2013.

But not this year. The side finished second, with six wins and two losses in the regular season, and after beating Wairarapa-Bush in the semifinal last Saturday will host the final against Wanganui this Saturday.

New coach Jason Forrest, who took over this year after a couple of years as assistant, said work off the field had been just as valuable as performances on it.

''The key for this team is the culture the guys have set. Just the way it is everyone together. In the old days you would have groups splintered off, club guys sticking to their own. But this group, it is just one big group,'' he said.

''They are all just a bunch of mates. In the changing rooms everyone just sits together and sits down wherever.''

Getting the culture right was vital.

''Before the season it was about getting the off-field stuff right and then the on-field stuff would follow. We're a bunch of battlers, really. Sure we've got some X factor, but we need to work hard for each other.

''We've had some tight games this year but managed to stick together and get home. Previously, the guys would have just given up. You look at the Wanganui game. Sure we lost it, but scored a last-minute try, got a bonus point and that's helped us to get where we are now.''

Forrest is a proud North Otago man. He was born in Duntroon, went to Waitaki Boys' High School and played rugby for the union. He went overseas and then came back in 2006 and now works as the union's rugby development officer.

Being a head coach created a lot more pressure, Forrest said, but he was prepared for it. He had a big think before applying for the head coaching job at the end of last year.

He wanted to set new standards and get some attitude back into the side.

Getting good loan players was vital.

''They have been outstanding. In previous years, without naming names, guys have come in and wanted to put themselves first, not what they can get out of the team. Not these guys - they are totally team first. Just get in and be part of the team.''

The loan players are real performers on the field, too.

''It started on the bus trip back from Timaru in our first game after beating South Canterbury. It used to be that the boys would do their own thing. But it changed. The old guys got on the back seat of the bus. They got their own music and took control.''

Farmer Nic Anderson looked after the forwards and was a man who loved the set piece and there was always a lively discussion over team selection. He travelled two and a-half hours to get to training twice a week.

Forrest also rang up Barry Matthews, having known him for years, and the former North Otago coach had run water for the past couple of games.

''Rat is Rat. The man is a freak about rugby. What he doesn't know about the game is not worth knowing. He just sees things differently. Picks up on other stuff we don't see.''