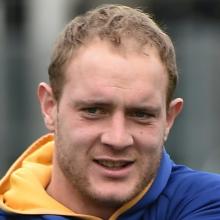 Matt Faddes
Former Otago and Highlander outside back Matt Faddes has agreed to a one-year deal to play for the province in the national provincial championship this season.

The 29-year-old will be joined by prop Jermaine Ainsley and lock Will Tucker.

Faddes, who hails from South Otago, represented the province from 2011 to 2019.

His most recent game was Otago’s Ranfurly Shield defence against Thames Valley in Wanaka in 2019.

He bought up 50 games in the fixture and shortly after left for Northern Ireland to take up a two-year contract with Ulster.

Otago coach Tom Donnelly is confident Faddes will "slot back into the team nicely given the number of first-class seasons he has under his belt".

"He is a great team player and will be an asset on and off the field. We look forward to seeing how his overseas rugby experience in Ireland has hopefully benefited his game."

Ainsley, who is originally from Cromwell, has played three tests for Australia.

He attended Otago Boys’ High School and represented Otago Metro under-16 in 2011.

He is still recovering from an ankle injury which he picked up during the Super Rugby season with the Highlanders earlier this year.

But he was tracking well and should become available in the first few rounds, Donnelly said.

"We are stoked to see him back representing the union and the Golden O after all these years.

"He is a world-class tighthead that has played international rugby. It will be exciting to see a son of a former Otago player getting the opportunity to play for Otago as well."

Tucker, who first signed with Otago last year, returns for another stint.

"He had a solid season last year and we are happy to see him back in blue and gold."

Donnelly could not be reached for further comment but the Otago Daily Times understands front rower Hisa Sasagi is contemplating a return to help alleviate a shortage of props.

He announced his retirement late last year but played for Southern on the weekend.

The Otago Rugby Union is also understood to be talking to former Otago loose forward Adam Knight, who has been playing for Biarritz Olympique in France.

And Green Island midfielder Ray Nu’u is understood to have turned down a contract to play for the Southland Stags so he can pursue an opportunity with Otago.

Otago assistant coaches Jamie Mackintosh and Ryan Martin have been pencilled in to return. But there are complications around when the pair will be able to return from the United States due to their commitments in Major League Rugby.