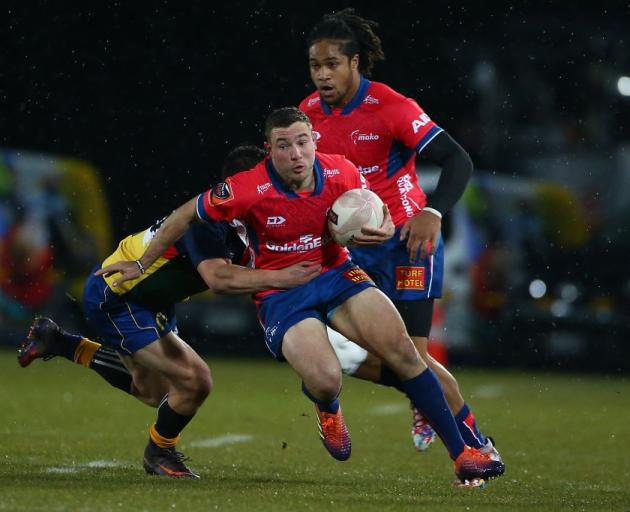 Mitchell Hunt tries to break a tackle for Tasman against the Sassenachs in their preseason game last week. Photo: Getty Images
The Mitre 10 Cup kicks off this week and, as usual, there are some contenders and a few pretenders. Rugby writer Steve Hepburn looks at the 14 teams that will try to get to the big dance.

The buzz: Coming back with most of the side that won the title last year. Losing Evan Olmstead is a blow but will have Dalton Papali'i. Plenty of Super Rugby players who should do better at this level.

The buzz: Never looked likely last year with an inability to score points. Veterans Alex Ainley and Ross Geldenhuys are around but much will depend on Dan Hollinshead and Mitch Karpik.

The buzz: Still plenty of depth but every year the side loses players and can the replacements keep coming? But quality in the likes of the loose forwards and locks so should still contend. Luke Whitelock will be a big player for them.

The buzz: Won only two games last year but squeaked in to stay up in the premiership. Has plenty of hard workers and well coached. But some holes and if injury hits, could struggle. Has Sonny Bill Williams early on, which is a bonus.

The buzz: Had a shocking 2017 but better last year and will be looking to kick on. Class in the likes of Gareth Evans and Isaia Walker-Leawere and a batch of promising youngsters. Needs to get more consistent. Veterans Brendon O'Connor and Ben May floating around and could be a bonus.

The buzz: Former Highlanders assistant coach Peter Russell returns from Japan to coach the Turbos. The side has some star quality but a few unlucky injuries derailed its campaign last year. Needs to have more steel in the engine room and convert chances.

The buzz: Veteran coach Kieran Keane has been around a few unions and overseas and North Harbour is his latest port of call. The side will feel the loss of Bryn Gatland but Dillon Hunt and Bryn Hall will be key players.

The buzz: Did well to make the playoffs last season and will again look to make an impact. Has lost a key player in hooker Matt Moulds, who has gone to England, but plenty of talent coming through. Sam Nock and Matt Matich are important men for the side.

The buzz: Came close last year and many returning from this year. Injuries will be key, as they always are, and if captain Michael Collins can get on the paddock. Solid forward pack and has some matchwinners out wide but loss of centre Matt Faddes to overseas could be a bigger blow than many realise.

The buzz: The only way is up for Southland after not winning a game for two years. The side is fitter and more organised than last year. Marty McKenzie returns home and is a quality player at this level. Needs a win in its first couple of games.

The buzz: A nightmare last year with a combination of mass injuries, poor play and losing the Ranfurly Shield had the side relegated out of the top division. Has let some players go but if all the top-line talent can get on the park then could be very competitive. Look out for Waisake Naholo and his younger brother Kiri.

The buzz: Has made the semifinals five years in a row and lost just one game in the regular season last year. Has a large pool of talent and starts all over the park. Hard to find any weakness. If not this year, then when is it going to happen?

The buzz: Last year, the side started poorly but got on a roll and could not be stopped. Some quick backs and hardworking forwards. Will miss Sevu Reece if he makes the All Blacks. Some players facing the difficult second-season syndrome.

The buzz: The Lions will again be in the mix with lots of quality but need players to stay on the paddock and show some fight when the chips are down. Disappointing the side has to ship in Italian lock Josh Furno and Reds prop Sef Fa'agase to fill some gaps. Surely there should be some tight forwards in Wellington who can step forward?