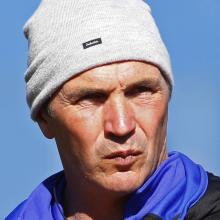 Jason Caskey
North Otago and Wanganui are no novices when it comes to rugby finals.

Since the inception of the Heartland competition in 2006, Wanganui has won the Meads Cup on six occasions and has been beaten in the semifinals four times.

If it beats North Otago in Oamaru today, it will be its fourth title in the last five years.

It has been in good form this season. The Old Golds have lost just two games, but one of those was to Wanganui. The visitor is on a six-game winning streak and arguably the favourite.

The atmosphere should be tremendous. A massive crowd is expected and North Otago finished strongly in its loss to Wanganui, so the teams are evenly matched.

Wanganui coach Jason Caskey was pleased with how his side has improved following three consecutive losses at the start of the season.

"We had a number of new players in the team, but they've become stronger as the competition progressed," he said.

"It takes time for new players to adjust and most teams now seem to have a high turnover of players from season to season.

"The main thing is to have key players in key positions. One thing we learnt from North Otago in our first game was that the game is only over when the final whistle blows.

"North Otago trailed 10-27 midway through the second half yet they came back, picking up a bonus point to lose 22-27.

"We have pace out wide and when things get tight it's difficult to expect a forward pack to rumble 60 or 70 metres upfield.

"But if you've got one bloke who can run 60 or seventy 70 himself it's a huge advantage."

North Otago has made just one change to the side which beat Wairarapa Bush 27-25 in the semifinal. Prop Mike Mata'afa replaces Jake Greenslade on the bench.

North Otago has been without captain and hooker Sam Sturgess for the past two weeks. He badly injured his foot in a ruck during the match against the East Coast and requires corrective surgery.