‘Nothing’s going our way’ but ‘the belief’s there’: Brown 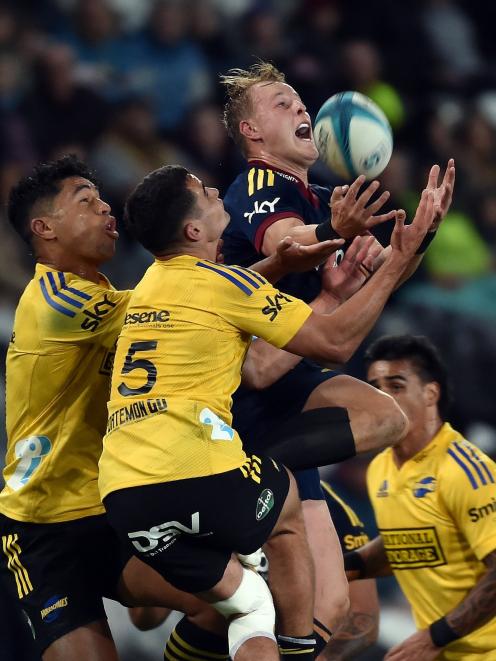 Highlanders wing Sam Gilbert takes a high ball as he is surrounded by Hurricanes players including Josh Moorby during the Super Rugby Pacific match at Forsyth Barr Stadium in Dunedin on Saturday night. PHOTO: PETER MCINTOSH
Tony Brown is keeping faith that the Highlanders’ luck is due to change.

The team found itself on the wrong end of two decisions which could have turned Saturday night’s 22-21 loss to the Hurricanes at Forsyth Barr Stadium.

It leaves the team with just one win from eight games, as it looks ahead to a three-match trip to Australia and Fiji.

Highlanders coach Brown remained positive about the effort the team was delivering.

While admitting luck had not been on the Highlanders’ side, he remained optimistic that would change eventually, and the results would come with it.

"I think we’ve showed a lot of heart right throughout the campaign," he said.

"But the effort the guys are putting in and how we’re preparing for the game is first class. I’m really proud of the guys for that.

A blatant shoulder from Hurricanes hooker Asafo Aumua to the head of Gareth Evans, at a ruck with four minutes to play, was deemed not foul play.

The act left the Highlanders loose forward with a swollen black eye and he had to leave the field for a head injury assessment.

Had it been called in line with similar incidents in recent years, it would seem to have been an obvious red card.

That was certainly how Highlanders lock Josh Dickson’s tackle to the head midway through the first half was, correctly, ruled.

It could have left the Highlanders a numbers advantage for the final passage.

Despite that, they still came close to snatching a win.

Prop Saula Ma’u reached out to score with the final play of the game.

A decision to not award the try on field was always going to be hard to overturn, particularly given the largely inconclusive footage, although had it been awarded it likely would have stood.

Brown was philosophical about the non-try, acknowledging it would have been difficult to change the on-field decision.

Regarding the Evans incident, at the post-match press conference he said he had not seen it but it would be "very disappointing" if there had been head contact.

Other injuries had not helped the Highlanders either.

Alongside the Evans head knock, the team picked up two more on Saturday.

No8 Marino Mikaele Tu’u had strained a hamstring before kickoff, forcing a late change.

Brown said he did not think it was too serious, although he was unlikely to play against the Brumbies on Sunday.

Utility back Denny Solomona also left with a hamstring strain while saving a try 15 minutes into the game.

Despite that, Brown said the belief remained strong in the team.

The players had shown spirit to withstand an opening 20-minute barrage from the Hurricanes, keeping the score at 7-3.

In the following 20 minutes the Highlanders limited them to just seven additional points, holding on with 14 men to go to halftime at 14-6.

They were able to work their way back into the game in the second half and led 21-17, before Aidan Morgan scored in the corner to snatch back the lead late for the visitors.

That gave the team momentum for the future, and the Highlanders were not taking the Australian teams lightly, Brown said.

He felt preparation was key to keeping the spirits up.

"We prepare as good as any team I’ve been involved with prepares.

"That’s how you create the belief. You always have a plan to win every week and the boys execute the plan.

"At the moment we’re just not getting the rub of the green, it’s not going our way.

"The belief’s there. If we keep preparing well and we keep performing, we’ll be fine."

In the weekend’s other matches the Chiefs beat Moana Pasifika 45-12 and the Reds edged the Rebels 36-32, while the Waratahs rode a fast start to a 41-24 win over the Force.