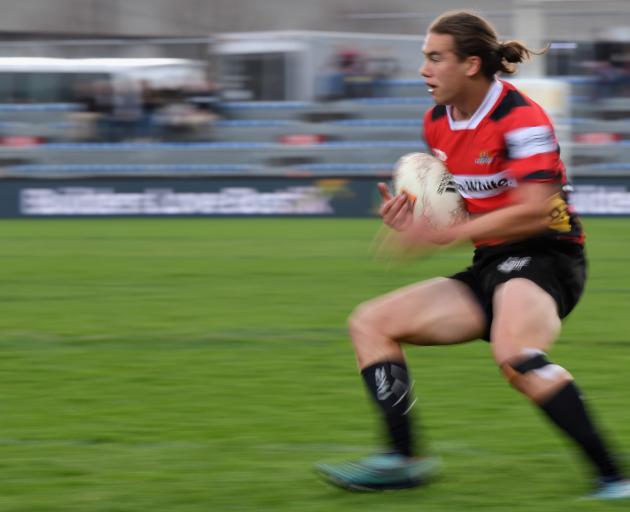 Connor Garden-Bachop has ties to Otago, with his dad Stephen having played for Otago in the 1990's. Photo: Getty Images
The cavalry has arrived.

A couple of them were no surprise.

Mitch Hunt's move south has been well signposted. That story broke in May, but the franchise confirmed his move only yesterday.

Otago winger and national sevens representative Jona Nareki has also joined the side.

That always seemed likely. He has been electric for Otago and is a good pickup.

The other two players who will wear the blue and gold next season are Connor Garden-Bachop and Ngane Punivai.

Garden-Bachop (20) has ties with the region. His father, former All Black Stephen Bachop, played for Otago between 1992 and 1996.

Garden-Bachop has played for Canterbury and Wellington in the Mitre 10 Cup.

"It's awesome to be given a chance to follow in my old man's footsteps and join this awesome franchise," he said.

Punivai, also 20, was the captain of the Reuben Thorne-coached Christ's College First XV in 2016 and made the New Zealand Secondary Schools team.

The following year the utility back was selected for the New Zealand under-20 team for the Oceania Rugby Championship.

He is a strong ball-carrier with good skills.

Hunt, meanwhile, was the man who broke the Highlanders' hearts with a sensational dropped goal.

He nailed a 43m attempt to seal a dramatic 25-22 win for the Crusaders two years ago. But his opportunities have been limited with the likes of All Blacks Richie Mo'unga soaking up all the game time.

He has managed 42 Super games, though. And he can play fullback or first-five.

Hunt played alongside All Blacks Jack Goodhue, Anton Lienert-Brown and George Bridge for the New Zealand under-20 World Championship team which won the title in Italy.

"I've had a fantastic four years with the Crusaders and I'm very thankful for the opportunities they gave me," Hunt said.

"I can't wait to get to work with my new team-mates,
coaches and supporters of the Highlanders. I'm excited to learn, work hard and play for a great club."

Nareki (21) was a member of the 2017 world champion winning New Zealand under-20 team. He is fast, he is agile and he knows how to score tries. He was also part of the Otago team which took the Ranfurly Shield off Waikato last year.

Earlier this month the Highlanders signed sevens player and Northland back Scott Gregory.

Highlanders coach Aaron Mauger has been forced into a rebuilding phase following some very heavyweight departures.

But Mauger has nabbed some promising talent.

"All of these players have the potential to be very exciting players for the club going forward, they all have speed and deception and you need to have players with X-factor in any squad if you are going to do well in Super Rugby," he said.