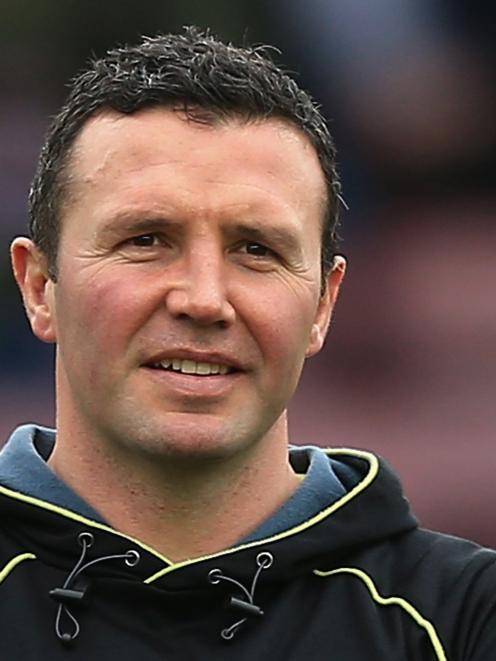 Aaron Mauger. Photo: Getty
The Highlanders finally get off the training paddock and on to the playing field tonight as Super Rugby comes to Alexandra for the first time.

Though much focus will centre on who performs the best in the No10 jersey, coach Aaron Mauger said it was an audition for every member of the squad who took to the park.

"It is just a good opportunity for us to put all that training we have been doing on to the field. It is important to test ourselves in what we have been trying to do and perform under pressure," Mauger said.

"We just have to make sure we are clear in our plans and what we are trying to do. We have made a few adjustments in what we did from last year. Even . . . the things that succeeded last year we will be looking at."

The main focus for many will be on first five-eighth, where Josh Ioane has been named to start.

But Mauger said all three first fives in the squad - the others are Bryn Gatland and Marty Banks - would get 30 minutes each as they seek to be the clear No1 after the departure of Lima Sopoaga.

All three No10s have impressed at training and would be keen to show their wares, he said.

Mauger said training had been going well but it was time for a game.

The first competition match was only two weeks away so this was an important game for the Highlanders and players.

Mauger said the players were in top physical condition and he paid credit to both the players and the medical and coaching team which had worked hard.

The Highlanders will give all the 33 players named at least one 30-minute period. Mauger said.

He said any less than that and players may struggle to feel as though they had made a contribution.

The Waratahs were also keen to play three 30-minute periods, having brought over plenty of players. Most of their top-line players have not travelled.

Props Josh Iosefa-Scott and Ayden Johnstone will get their first taste of the game at this level for the Highlanders, while halfback Folau Fakatava also makes his first appearance in a Highlanders jersey.

Josh McKay starts at fullback with Matt Faddes on the wing.

Hawke's Bay prop Joe Apikotoa has joined the squad as an injury replacement for Siate Tokolahi. Tokolahi had a knee operation at the end of last season and is coming back to full fitness. He is expected to be right for the start of the season.

The All Blacks who went on the end-of-year tour last year and the players just back from the Japanese top league will not be playing.

The weather in Alexandra has been hot, but rain is forecast for this morning, then clearing in the afternoon.